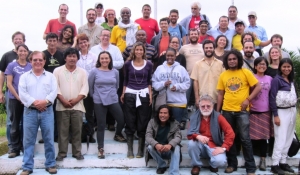 An international dialogue between communities and workers

An 11 day study international tour in which 40 participants travel to Ecuador to exchange ideas concerning the Yasuní proposal to leave the oil in the ground, as a starting point for a global community-worker dialogue aimed at finding ways of collectively phasing out fossil fuels, and constructing a low-carbon energy system. Participants will be from organizations in countries rich in fossil fuels resources, especially those which are globally “strategic” as either fossil fuel producers or consumers. This includes:

• Advocates of leaving oil, and other fossil fuels, in the ground, in Southern countries, as well as in the North. Campaigns against fossil fuel use in countries where levels of consumption are high.

• Trade unions in the fossil fuel sector, especially those opposing privatization of fossil fuels, and favouring democratic control and ownership of these resources and the revenues they generate.

The event will be divided into 3 parts. It will start with a visit to Yasuni National Park. Local hosting communities will prepare a program for participants to learn about the concerns of affected communities, some of whom are indigenous peoples living in voluntary isolation, and about the threat they face from oil exploitation, and the motivations behind the Yasuni proposal. This will be followed by a 4-day seminar in Quito, together with Ecuadorian organisations, to discuss wider global strategic questions. A final public event will allow international participants to disseminate their ideas and findings within Ecuador.