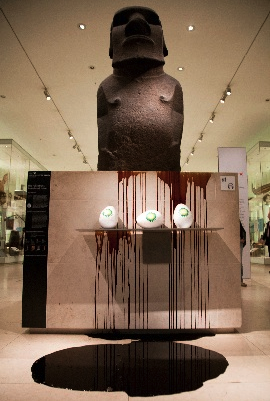 A spotlight on oil sponsorship of the arts

“Great art should not be complicit in climate chaos.”

Liberate Tate is an art activist collective exploring the role of creative intervention in social change. We aim to free art from the grips of the oil industry primarily focusing on Tate, the UK’s leading art museum, and its sponsorship deal with BP. We believe Tate is supporting BP, rather than the other way around, cleaning its tarnished public image with the disinfectant of “progressive” culture.

The collective was founded during a workshop commissioned by the Tate in January 2010, entitled “Disobedience Makes History”. The art activists running the workshops, The Laboratory of Insurrectionary Imagination (LINK), were told by Tate curators that no interventions could be made against the museum’s sponsors. The workshop participants refused this censorship, ended the workshop with an intervention and decided to continue their work together, setting up Liberate Tate the following spring.

Liberate Tate believes Tate’s sponsorship by BP, a corporation engaged in socially and ecologically destructive activities, is incompatible with the museum’s ethical guidelines. Tate’s stated vision in regard to sustainability and climate change and its reputation as a progressive institution is damaged by its association with oil companies. In addition, Tate’s mission is undermined if visitors to its galleries cannot enjoy great art without the museum making them complicit in creating climate chaos. Liberate Tate calls on the museum’s governing body to recognise this and end its relationship with BP.

The collective’s performance actions have included:

These actions were picked up by media outlets worldwide and set off a national debate about ethics and art sponsorship. This has led to a growing movement of artists and the public, including Tate members, raising their voices for a more ethical approach to funding.

Liberate Tate meets regularly to discuss ideas, run workshops and organise performances and other interventions. The collective is open to all who want to create art actions for a sustainable future.

“APE’s contribution to our work will help ensure the production of further creative interventions against oil sponsorship, while enabling us to organise a powerful network of art activists by developing workshops and activities that engage, inform and entertain.”