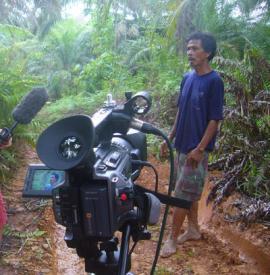 The organisation, LifeMosaic, films the moving testimonies of Indigenous peoples who are affected by the oil industry in the Ecuadorian Amazon. This is part of a larger LifeMosaic project to produce a film for use by Indigenous communities on the effects of climate change, successful community organisation, and the self-determined adaptation and mitigation to climate change. This film will be distributed widely across the humid tropics, connecting and supporting Indigenous peoples as they defend their forests and the right to develop their own strategies for adapting to and mitigating climate change. LifeMosaic, working with with Ecuadorian Indigenous peoples’ organisations, will take part in 2 field-trips to isolated communities to film their testimonies, and edit the footage. It is hoped that the film will influence the Ecuadorian government to accept the rights of these people to self-determination.

The overall project produced a set of climate literacy films for indigenous peoples in the humid tropics, lauched in late 2010. In these films, indigenous peoples from the peat swamps of Riau, the Misquito coast, the foothills of the sacred Rinjani volcano, the highlands of the Philippines, and the great forests of Borneo and the Amazon, all speak out about the climate crisis from their unique perspectives. The films are based on testimonies from Ecuador, Nicaragua, the Philippines and Indonesia.

LifeMosaic wanted to make these films because, together with our indigenous partners, we believe that inspiring and simple information on climate change will help indigenous communities to frame the choices they are forced into making each day between the promises of mining, plantation, and oil companies on the one hand and the challenges of keeping their territories, forests and cultures strong on the other.

The films are designed to empower indigenous communities in the humid tropics, providing them with information to support them to defend their rights and their forests, and to develop their own strategies for adapting to and mitigating climate change.

During a 2 month trip to Ecuador in early 2010, LifeMosaic conducted 3 community filming field-trips to record community and civil society testimonies.

Interview with Shaman Rufino, in the community of Cofan Dureno Ecuador, March 2010

Two filming trips were to indigenous communities affected by and resisting the oil industry. The first of these was to the Cofan communities of Dureno and Dovuno in Sucumbios province; the other to the Sarayaku Kichwa community in Pastaza province. Community members provided powerful and illuminating testimonies on impacts of the oil industry, community responses and cultural revitalisation. A third Ecuadorian filming trip focused on the farming community of Nuevo Mundo, Pichincha province, and its 10 years of experience in regenerating the rainforest using the Analog Forestry approach.

During our time in Ecuador, LifeMosaic also captured video clips; carried out sub-titling in the field from A’ingue and Kichwa languages; collected existing archive footage; recorded music; and carried out preliminary editing. LifeMosaic held numerous meetings with relevant organisations to consolidate relationships with indigenous peoples’ organisations and to develop strategies for disseminating the films being produced through existing networks.

After a year of filming with 23 communities in 4 countries, we have learnt that demand for these films is even greater than we had initially assumed. All the communities we met were anxious to learn why their seasons were changing. There is a huge demand from community organisers and field-staff for resources like the ones we are finalising. Together with our partners we are looking forward to the long-term task of getting the films to thousands of indigenous communities, through various indigenous networks, in a number of countries.

We believe that the films from this project can make a real difference in accelerating understanding about the complex issues surrounding climate change, making the connection between the local knowledge and awareness of indigenous communities and global awareness of the climate crisis. Where these two meet powerful transformations can occur, leading to action to protect the Earth and to strengthen resilience to climate change.

“We are delighted to receive this support from APE for our ‘Community Conversations on Climate Change’ project which will support increased indigenous peoples’ participation in climate change decision-making by disseminating relevant information to communities, networks and policy-makers.” Life Mosaic