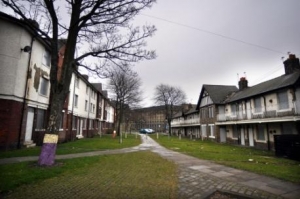 Training and support for “green regeneration” in the Longlands district of inner-city Bradford, West Yorkshire

The Longlands Regeneration Project is a new initiative focusing on the inner-city district of Longlands in Bradford, West Yorkshire, UK. It aims to encourage residents to become active in the neighbourhood and set up new “green” projects that will improve the local area in a sustainable manner, such as a local food growing project, a recycling scheme and a community owned renewable energy venture.

Longlands is a historically important district for Bradford as it was the site of arguably the first major slum clearance and social housing scheme at the turn of the 20th Century. Today, regretfully, it has declined and become a highly deprived area with multiple social problems such as high levels of crime and anti-social behaviour, high levels of unemployment, low levels of income and education attainment and low levels of community activity.

Love thy neighbourWith no realistic prospect of public funding going into regenerating the neighbourhood, a community-based approach to improving conditions is the only remaining option. Our project will deliver a programme of 10 informal, interactive and fun training sessions on different topics relating to how to be sustainable in various ways such as those mentioned above and how these can improve local quality of life. Each training session will be followed by a workshop to bring together residents with ideas from the training for new projects so we can then support them to turn them into workable projects.

Ultimately our project intends to create a more active and positive neighbourhood with a revived sense of community spirit and where residents take steps to improve local conditions and grow their confidence. We hope it will lead to increased levels of residents going into further education or training or attaining employment using our training and any volunteer work afterwards on their CVS. It aims to demonstrate that it is possible to create local regeneration through learning.

We have now delivered our programme of training and support in Longlands.  We have delivered all ten subjects and followed each with workshops and mentoring support.  This has succeeded in a number of new ventures being formed as a direct result of the programme, some just covering the target areas but others covering the City Centre more widely.  We succeeded in attracting residents from Longlands, from other parts of the City Centre and a number of people from wider afield.

A total of 112 unique learners have participated in the programme.  Attendance per session has varied from 6 to 28.

We succeeded in attracting Longlands residents, some of whom have attended many sessions, but most have chosen one or two topics based on their interests.  There have also been residents from other parts of the City Centre and from further away.

The following are initiatives to have emerged from this work and will benefit Longlands:

There are proposals for a community renewables feasibility project that would involve putting PV solar panels on the tenement blocks but this is very much at its early stages.

Many learners from outside the City Centre have also expressed interest in developing projects in their home areas.  This has included people from Buttershaw, Saltaire, Haworth, Shearbridge, Hirst Wood and Keighley who are now pursuing new initiatives.

The project has demonstrated that combining short ‘how to’ training sessions on community work topics followed with support can encourage people to take the learning and turn it into new initiatives.  There have been a number of spin off projects in Longlands and other ventures cover the City Centre as a whole as a direct result of our work.

The project has definitely contributed towards increasing local community cohesion and identity for Longlands with the local history project helping to provide a sense of identity for the area.  Residents have met with other residents in Longlands and neighbours from other parts of the City Centre, introducing them to people they might not have otherwise encountered and developing new social ties.  Indeed, some have been working together on the new projects.

Having designed a curriculum of training topics, a set of lesson plans and learning resources, purchased the equipment to deliver this training and gained the experience of seeing it through, we have effectively created a template that could be taken to a new location and replicated.

In the meantime we continue to stay in touch with learners who are now pursuing the spin off projects to provide them with advice and support.