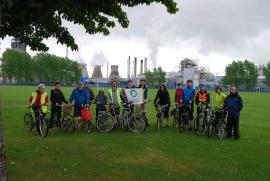 APE UK supported FoE Scotland’s Low Carbon Power Community Ambassadors project which has been active since January 2011 and we are having huge successes in engaging with communities threatened by fossil fuel development in their local area. The first phase of the project will finish at the end of May 2011, after which we hope to continue with a second phase entitled Confident Communities which will focus more upon work with communities living in areas with massive renewables potential.

We have worked with local community groups to bring added value to their campaigns by offering community training sessions about energy supply and campaigning skills. Our Energy and Finance Officer and Activism and Volunteers Officer have visited communities from the Isle of Arran to the Port of Leith, bringing hard facts about energy usage and production, effective campaign strategies, media-friendly props and stunts and financial support for stalls, posters and volunteer expenses. To make it easier for people to argue against dirty developments we have condensed our Power of Scotland Secured report into an accessible community briefing, explaining why Scotland doesn’t need fossil fuels if we invest in renewables.

• No New Coal at Hunterston

Following the submission of over 16,000 objections to the proposed new coal-fired power station at Hunterston (already the second highest number ever received by Ministers), our campaigning has turned its attention to galvanising opposition within North Ayrshire, where so much hangs upon the forthcoming decision of the council. A formal objection from North Ayrshire Council will trigger a public local inquiry, and make the government more likely to refuse the proposal outright. FoES successfully sought a formal opportunity for the campaign to brief councillors and council staff directly in September 2010. This is unusual when an active planning application is in place, and took significant time and effort to arrange, with assistance from a sympathetic councillor and local group members. Ayrshire Power asked to attend the briefing but were excluded by the council.

Friends of the Earth Scotland has been playing a leading role in coordinating a coalition campaign (involving CONCH, WWF Scotland, RSPB Scotland, Christian Aid and WDM) which aims to ensure that each of the 30 North Ayrshire councillors feels the strength of local opposition to the proposal.

FoES’s unique contribution to the campaign is a giant ‘Aunt-Sally’ postcard which is making its way around the markets and town centres of North Ayrshire. It shows – with comical artistic flair – how the proposed power station could transform the coastline, and has proved to be an invaluable and refreshingly light-hearted way to win media attention, as well as spark conversations between the general public and the volunteers who have been manning stalls – with our template objection letters and briefings at the ready.

In November our 170 Ayrshire-based members received a pack with a briefing on the likely impact of the power station and a guide to visiting their local councillor. In October we attended an event at the Scottish Parliament to deepen our understanding of the impacts of coal mining in Indonesia on human and labour rights of indigenous people, and on the local environment, which has informed the international justice element of our campaign. This event was attended by our Energy and Finance Officer and three local campaigners from North Ayrshire.

So far the ‘Hunterston Roadshow’, as it has been nicknamed, has visited Irvine, Killwinning, Kilbirne and Glangarrock Craft Fair, Saltcoats Town Centre, Fencebay Farmers Market and Portencross Coffee Morning – and has already resulted in over 150 letters of objection going to local councillors.  Our ‘ Aunt Sally’ postcard featured in the first front page local media attention that the campaign has won in over 18 months!

Our arguments and comments surrounding Hunterston and appropriate deployment of CCS technology have generated numerous national and local media stories, including:

• Twitcher takes on might of £3bn power plant, The Big Issue

As part of our commitment to ensure our work is accessible to people living in the Highlands and Islands we visited the Isle of Arran, across the water from the proposed power station, to raise awareness of the effects upon local health, tourism and the environment if the power station goes ahead. On the boat back to the mainland our campaigners were trapped in fog for five hours!

We aim to run positive campaigns which offer solutions to environmental issues, rather than simply campaigning against the problems. In all of our Low Carbon Power work we have highlighted that Scotland doesn’t need any of this dirty power to keep the lights on – we can generate up to 185% of our electricity needs by 2030 with just renewables – so there is no justification for the social and environmental injustices caused by fossil fuel power.

To this end we are developing a second phase of this work programme – Confident Communities – which specifically works with communities in areas with high renewables potential. As a preliminary exercise we visited Whitelee wind farm, Europe’s largest onshore wind farm, to deliver workshops on Scotland’s energy mix and local campaigning. Together with Renewable UK we met with interested individuals from across Scotland and shared facts, busted myths, thought about how to counter anti-wind campaigns, filmed practice TV interviews, and took a tour of the wind farm.

Our Head of Projects and Campaigns surveys Whitelees wind farm with local people who are in support of renewables on their doorstep.

Two of the participants were from the immediate neighbourhood of Whitelee and we will be uploading their testimonies about why they support wind farms to our youtube channel. This will form part of our package of materials giving Scots the confidence to speak out in support of renewable energy.

• No to Big Biomass around Scotland The last few months have seen a rush of applications for large-scale biomass plants around Scotland. For information about why FoES objects to these so-called renewable plants please see http://www.foe-scotland.org.uk/biomass. Our upcoming Skills Share has been designed to be of benefit to Biomass campaigners as many of them are taking part for the first time and we want them to feel really confident about protecting their local area from big developers and their attempts to use greenwash to gain approval for environmentally damaging proposals. FoES has worked with and for local communities to campaign against these proposals in locations around Scotland including:

The Friends of the Earth Tayside group has led local objections to this development, submitting a well-researched objection with the help of our Energy & Finance Officer. Kimberly Ellis, a member of the group, outlines the campaign; “The main arguments people make locally against the biomass “renewable” energy plant are about its visual impact and effects on local air quality. But there are broader issues: the social and environmental impact of logging and monoculture in other countries, not to mention the overall Co2 emissions when you take changes in land use into account. It’s about time we develop a sense of global solidarity with people in so called “developing” countries.”

She goes on to explain the latest developments in the campaign; “Members of the opposition at the council suggested recommending that the Scottish Parliament start a public inquiry into the proposal which would have given us more time to demonstrate to politicians what a bad idea Forth Energy’s Proposal is in terms of ecological but also economic sustainability. However this was voted down by Councillors in the main party.”

The group has had good communications with their MSP, who has said that the government is looking at its biomass policy. Doug McLaren explains, “We hope that they will move away from big biomass towards smaller plants, which should make full use of both the electricity and heat produced, and which use locally sourced, sustainable fuel.”

Friends of the Earth Falkirk submitted a formal objection to the planning application for the Forth Energy Biomass Plant in Grangemouth. Local residents already live next to Scotland’s only oil refinery (with gas flares and cooling towers visible for miles) and asking these people to put up with another enormous energy plant seems particularly unfair.

The local group’s objection was in support of the growing community concern which was highlighted at the Grangemouth Community Council public meeting in the end of the planning consultation period. The group are not against biomass energy production in principle but feel that the scale of the Grangemouth Energy Plant, in conjunction with the other developments by Forth Energy, makes the proposal unsustainable. They are particularly worried that the scale of the development would impact on the supply of sustainable wood fuel on the global market which will add to pressures on rainforests and the indigenous people and animals which rely on them.

Leith is a lively area of Edinburgh which ranks high on the Scottish Government’s Index of Multiple Deprivations and plans for a biomass plant initially received little attention from the rest of Edinburgh. We have been working with the local No to Leith Biomass group, many of whom are first-time campaigners, to highlight the social, economic and environmental threats posed by the proposals. We have provided advice on garnering political support and effective ways of using stunts to help their cause, attended all of their meetings and hosted a ‘No to Leith Biomass’ e-action on our website, as well as running stalls in the local area to garner community opposition to the proposals. We have been pleased to see the campaign garnering local media presence which now reflects the negative side of the proposals.

Leith parents concerned about biomass’ negative impacts on child asthma rates take part in the Scottish parliament lobby requesting a moratorium on new big biomass until health concerns have been addressed with posters and flyers paid for by FoES.

‘We’re delighted that APE UK are supporting our work with local
communities standing up against dirty developments in their area. The
grant comes at a crucial time for us, and it’s heartening APE recognises
the importance of empowering local people to tackle climate change.’