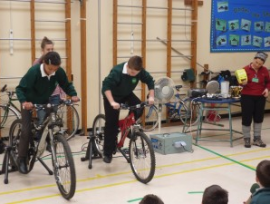 Using bicycle generators as a tool to visualise energy and understand personal power consumption: by transforming watts into human effort.

CO2 emissions from energy production are the primary contributors to climate change. People’s awareness of climate change, its impacts and solutions are on the rise. The next challenge is to act upon what we have learnt, which will be difficult, especially as energy is widely available to us and our use of energy and the climate change it causes are largely invisible. As long as we keep paying our bills, there will be power to run our TVs, toasters and microwaves. Telling someone that they are using 1800 watts right now has very limited value, because it is difficult to know what that means. How can we expect to change something we can’t comprehend? What does 1800 watts relate to? How can we reduce our daily energy use?

Magnificent Revolution has pioneered pedal-power as a means of promoting sustainable living. We help people to physically feel what power usage really means, providing an invaluable tool for reducing our personal carbon footprint. Boiling water for 1 cup of tea means 60 people pedalling for 1 minute, making a toastie requires 10 people pedalling for 4 minutes. Being able to visualise, in human terms, the effort that it takes to power electrical equipment helps us to understand our power consumption.

Since receiving the APE funding, MR have screened 4 pedal-powered cinema events with over 1000 participants including a series screening of artist’s films for residents in Birkenhead, a performance of Belleville Rendezvous in Brixton, and George Orwell’s Animal Farm in a temporary orchard in Southwark. 4 pedal-powered sound system events have also been held with over 2000 participants. MR have appeared as part of Wood Festival and Shambala 2010, as well as working with a solar rig at Bristol Harbour Festival.

MR’s bicycle generator workshops help young people to understand why and how to reduce their energy use in a practical, fun and engaging way. Children learn about electrical appliances, their energy consumption and are invited to take energy-saving actions. Since receiving the APE funding, MR have held 6 children and young people’s workshops and assemblies with 1200 participants. MR have teamed up with Sustrans for a series of assemblies in schools around Essex.

Adult Pedal and Solar Power Workshops MR runs workshops on how to build pedal power generators, 12-volt sound systems and bicycle blenders for use in homes, communities or campaigns. People discover how to use their bike as part of a small power station, capable of powering computers, stereos, TVs and other small household appliances. In 2010 we will be running courses combining solar and pedal power. Since receiving the APE funding, MR have held 6 adult pedal power courses with 79 participants. Numerous projects have incorporated pedal power into their activities as a result of their members attending these courses. MR are also in the process of putting together a series of workshops in Bristol.

MR offer a range of pedal-powered products such as bicycle blenders and 12V sound systems. MR is in the process of launching a pilot single bike generator in the UK in 2010. Since receiving the APE funding, MR have built 2 bicycle generators for Groundwork London and London Cycling Campaign and begun selling DIY bicycle power kits through their website. MR have also started hiring out thier single bicycle generator and bicycle blender to like-minded  organisations for their campaigns and events. MR have also been approached by a group who would like to develop similar work in Australia. This will allow these ideas to expand to promote the use of renewable power and community resilience on a global level.