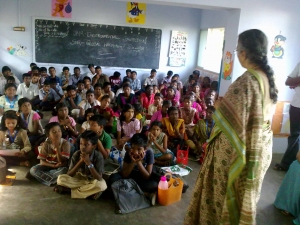 This is an extension of Project 259, previously funded by APE. URISE will expand its Mercury changes project to three states and aims at utilising arts, music and street plays as its mode to create public awareness on climate change and environment protection and bring in community participations.

URISE was able to successfully attain the objectives of its Mercury change projects during its first programs in 2011 and got great support from the student communities whom the project was focused on.

After the huge response for the competitive awareness campaigns and the successful awareness programmes on climate change and environmental protection, URISE  decided to utilize various art forms and cultural and community participation programme to expand its Mercury Changes campaigns to a second level, to varied target populations and to extend its outreach potential.

Sand art campaigns are creatively designed sand sculptures on highly populated beaches that will reflect human ideas on climate change. These sand art sculptures shall be displayed in beaches were industrial areas are found close to the shores and were the industrial wastes are dumped into the sea. We hope to bring about successful awareness programs with cultural music and art at its base line.