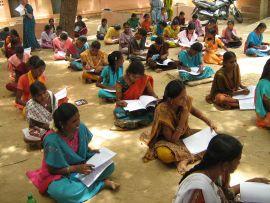 The Urban and Rural Institute for Social Education (URISE) is a non-government organization in Madurai, Tamil Nadu, India which is a registered NGO working for social causes since 1984. We have now started working on climate change project with support from APE on the project ‘Mercury Changes’.

Mercury Changes is about providing a chance for the younger generation to see the realities of climate change occurring around the globe. In the Indian cities where there is large industrial development and where there also is limited knowledge and care over environmental protection and climate change, URISE tries to bring in an awareness amongst both the urban and rural school level students aged from 13 to 19 thereby providing a chance for them to create a better place to live for themselves. We provide a chance for these students to see what their previous generation had failed to see.

The awareness level about climate change and environmental protection is limited both among rural and urban students in south India as there is no separate learning in the school system. URISE project Mercury Changes is expected to bring about changes through its activity campaigns and involving all the students in a participatory competitive event, based on the theme: Climate Change and Environmental Protection.

Mercury Changes project will be conducted by URISE in two phases: the first phase will involve selecting about forty schools both amongst the urban and rural area and conducting separate lectures, seminars, participatory events and tree planting programs among the schools with the help of climate change researchers and experts, thereby educating these students initially about the cause and effect of climate changes that has been happening around the world and the purpose of environmental protection so as to produce a better world for their future.

The second phase of the project will involve conducting competitive events, where we invite school students to participate in various competitions including creative drawing and painting, essay writing, innovative thinking and poetry. These competitions will all be based upon one theme – climate change and environmental protection. After the competitions the winners will be selected and awarded with prizes, by which we can broaden the campaign and make it much more effective. During the second phase of our project we will publicize the competitive event amongst the public so that the outreach potential of the campaigns expands; during our second phase we will also conduct bike rallies and mobile advertisements through which we ‘market’ the cause to the public.

What URISE aims to achieve through Mercury Changes is to strengthen the social learning process of climate change to the younger generation, to reach out to maximum number of schools in south Indian cities and to build students’ capacity to promote environmentally friendly activities, to create an effective knowledge base in these young minds about climate change and environmental protection so they grow up creating a better world for themselves to live in and preserve nature and life. URISE also aims to create awareness not only to the students’ communities but also to reach out to the public through the students themselves.

CONCLUSION: The outreach of the project was greater than expected. We were able to give lectures about climate change to more than 40 schools each in two districts of southern Tamilnadu, more than 300 students participated in the competition conducted in the Madurai district and the competitions extended to two days in each district, as the number of participants increased, the students showed great interest over the competitions. The competitions were acknowledged by various news papers and radio channels. After the competitions students of various schools carried out activities on their own interest. They carried out awareness rallies in cities and rural areas and planted trees around their school campus as a sign of support towards climate change and environmental protection activities. A few students created special interest groups with the support of their school through which they underwent various activities like clearing plastic litter around their premises, installing a bin for recyclable products and promised to educate as many people around them about manmade climate change. Various schools showed their support by providing separate hours for climate change education. These small steps carried out by the students and educational institutes are seen as a fruitful initial achievement of Mercury Changes project, the students showed great interest and concern over climate change and environmental protection once they were educated about the happenings and the cause; this brought us a step closer to reach to the mass society. The competitions and activities of these students were reported with the help of media. URISE started receiving various support from other climate change organizations, and we were also invited to various college level educational institutes to carry out the lectures on climate change with them. We now continue to create awareness in other districts of south Tamilnadu, with the help of our initial success and support we attained through the Mercury Changes Project.