Of the 8 million tons of plastic that enters the world’s oceans every year, 80% originates from land-based everyday post-consumer waste leakage, such as plastic bags, yoghurt pots, toothbrushes, plastic bottles, cigarette lighters, plastic cutlery and straws, bottle tops and lids, etc. The remaining 20% comes from ocean-based sources such as fisheries and fishing vessels including netting, lines, plastic trays and boxes and other debris. 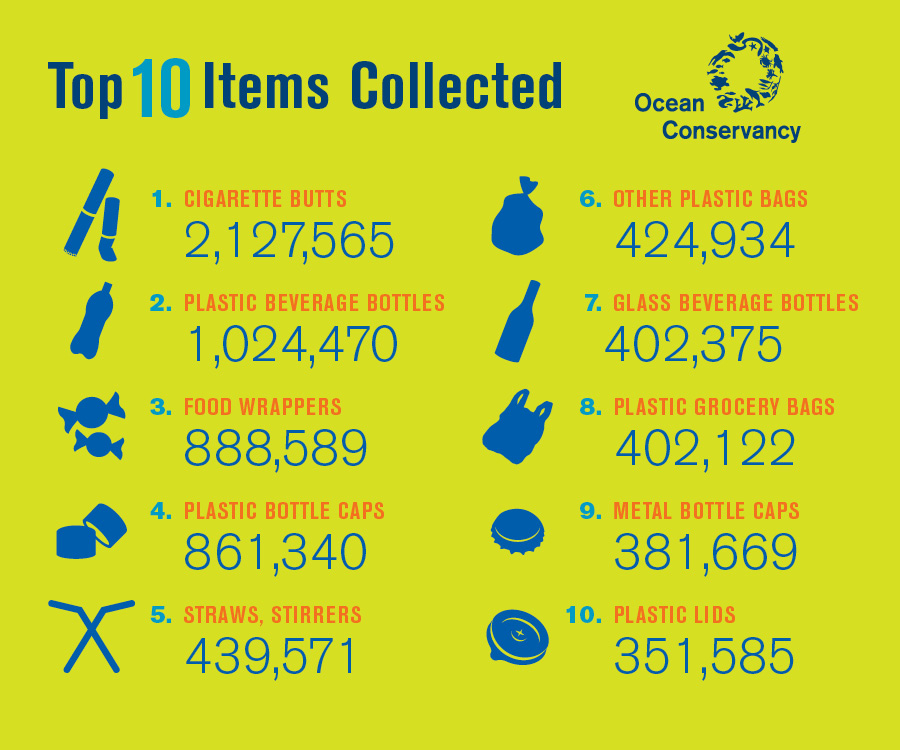 This plastic does not biodegrade in the ocean but disintegrates into smaller and smaller pellets as a result of weathering and exposure to ultraviolet radiation. Most ocean plastic comprises of millimetre-size plastic fragments, from these two sources – known as ‘micro-plastics’

Micro-plastics have an upper size limit of 5mm and have varied chemical compositions. Primary microplastics come from products that were originally manufactured at that size, such as micro-bead exfoliants used in personal hygiene and medical products, which reach the environment in waste water. An additional category of primary micro-plastics comes from the pellets used as the raw material for plastics manufacture, which are approximately 5mm in diameter. These pellets end up in the environment via accidental loss during transport or poor handling during the production process. Particularly high concentrations of pre-production pellets can be found on beaches near factories and processing sites.

Secondary micro-plastics result from the fragmentation and weathering of larger plastic items, often in the maritime environment. Another source of microplastics is our own washing machines: a recent study has shown that huge numbers of fibres are released by the domestic washing of fleeces and other clothing made from synthetic fibres including polyester, PET, polythene, nylon and PTFE. A single item of synthetic clothing can produce 1,900 fibres of microplastic per wash. Many of the micro-plastic fibres in the marine environment could originate in synthetic clothing. In the next 40 years, the world’s population is expected to double and to be concentrated in large coastal cities that will discharge larger volumes of sewage into marine habitats, increasing the amounts of microplastics that will be introduced into the marine environment – unless urgent measures are taken now.

The fate of these marine plastics in the aquatic environment depends on the density of the item. Plastics with a lower density than water are buoyant whereas those with a higher density are submerged, but whether the plastic is lying on beaches or floating in water, it is exposed to solar UV radiation and the weathering process, which oxidises and fragments the polymers into microplastics.

Another serious problem associated with microplastics is that they contain a variety of potentially toxic chemicals that can be released into the  environment. In addition to the potential of releasing additive chemicals into the oceans, microplastics can also absorb persistent, bio-accumulative and toxic substances, including POPs that are present in the oceans from other sources. Plastic debris and in particular micro-plastics are, in fact, often colonized by marine organisms such as bacteria, algae or diatoms or they can provide habitat for the larval and juvenile stages of marine animals. These toxins then get into the food chain, and due to the fact that plastic debris can persist in the environment for a very long time and can be transported over long distances, it can facilitate the transport of ‘alien’ species into environments where they were previously absent.

A recent study has shown that zooplankton can mistake micro-plastics for food and that once ingested, the microplastic can transfer into the body tissue of the zooplankton. Zooplankton are near the bottom of the marine food chain and are eaten by a number of other species meaning that micro-plastics create a risk of contaminating aquatic food chains that in turn has the potential to increase human exposure to harmful chemicals through seafood.