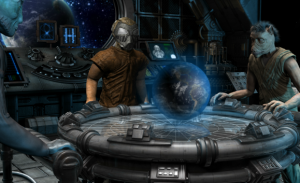 The aim of Odyssey 2050 is to motivate young people all over the world to take action on climate change, but millions of young people do not have access to things most of us take for granted like electricity, computers and DVD players. A comic book version of Odyssey 2050 will enable kids in areas of limited technology and financial resources to be introduced to the project and have fun while they learn about climate change and the need to take action on it.

Children reading the Odyssey 2050 comic in the classroomDuring the summer of 2012 the comics will be delivered to the communities in Nicaragua and will have arrived in time for the start of classes in August.The Nicaraguan phase of the project will be completed in October 2012. At that time we will have an event in the capital  Managua where we will showcase the works created by the children of Nicaragua’s North and South Atlantic Autonomous Regions which make up the Caribbean Coast region of the country. At this event we will have the personal participation of a selected group of children (and their guardians) who have made outstanding creations inspired by the Odyssey 2050 comic book workshops. These children will receive awards for their works.

We will reach a total of 300 schools in the most remote regions of Nicaragua with this project. UK Ambassador to Nicaragua Chris Campbell will join Bruce Callow founder of the Odyssey 2050 project, to visit one of the communities where the comics are being used. To give you an idea of the remoteness of these communities, the town being visited, El Ayote, is 6 hours by car from Managua and then another 4 hours by horseback.

The Odyssey 2050 comic APE funded has led to spin off projects. The first is the French version of the comic of which 100 copies have been printed and will be introduced into schools in Haiti in the coming weeks. The others are Somalia and Arabic versions. We hope that the Arabic version will generate interest in that part of the world in the lead up to COP 18 in Qatar.

Astronaut Franklin Chan signed 25 copies of the Spanish version of the comic which will be auctioned at a fundraising event to raise more funds to print more copies. A test workshop with the comic book in Escuela Jose Marti in San Isidro de Heredia, Costa Rica (with a high Nicaraguan population) has been held, and the results were fantastic. Odyssey 2050 is developing a bid to the Social Responsibility department of Costa Rica’s top newspaper La Nacion to help print more copies of the comic to introduce into ‘at risk’ urban neighbourhoods and marginalised rural areas of Costa Rica.