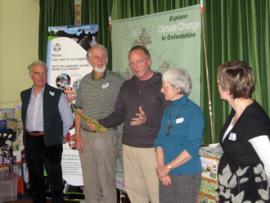 Creating a climate ‘buzz’ through performance and the visual arts

In addition ECI has major reputations for its Lower Carbon Futures Programme, including the acclaimed 40% House Project and its successor Home Truths; leadership of the national MONARCH CONSORTIUM on climate change, wildlife and ecosystems; its Amazonia and climate change programme, leading a 70-scientist network to enhance global change research in Latin America; and the scientific hosting of the Global Environmental Change and Food System (GECAFS), an international research network on food security. It also has an increasing record of innovative local public engagement projects.

Oxfordshire ClimateXchange is an ongoing project that seeks to create a “climate buzz” across Oxfordshire – an informed, inspired citizenry taking imaginative individual and collective social, economic and political steps in response to climate change. It wants people to recognise the wealth of climate and energy expertise existing in Oxfordshire: in its universities, businesses, voluntary organisations and increasingly in its communities. It aims to bridge the gap between the university and local communities by taking scientists out into the “pubs and clubs” to meet the people. The project will continue to support new and existing climate groups; it will launch Oxfordshire Eco-renovation Social Enterprise Network, including the hugely successful Oxfordshire Eco-houses Open Days (with COIN). There will also be a performance and visual arts project, Creative Climates and Oxon from the Ground –a county-wide engagement with the proposed Earth from the Air exhibition.

“ClimateXchange are delighted to have received funding from APE. This will allow us to support Oxon’s existing climate change community groups, continue the networking for the eco-renovation events (in partnership with COIN), further develop the creative aspect of our work and plan for future events and partnerships. Thank you!” Jo Hamilton, ClimateXChange Coordinator