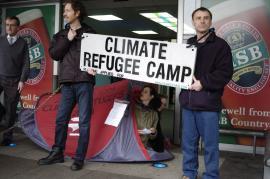 Through a combination of high-profile direct actions and a focus on clear, basic demands, Plane Stupid is changing the UK’s discourse on aviation. With arguments rooted in the science of the Tyndall Centre and Oxford University, Plane Stupid’s role has been to peacefully inspire others to take action against the root causes of emissions that constitute the fastest growing source of greenhouse gases.

PS aimed to broaden their focus beyond Heathrow to airport expansion in general, as well as engaging new activists from around the country. To this effect they shut down Stansted Airport on the 5th December 2008. 57 people, many of whom had never taken action before, and who had come from as far as Wales and Yorkshire, occupied the taxiway. The protest was timed to take place during pre-Copenhagen talks in Bonn.

The story was the main headline on CNN that morning, and made news across the world. Over 56 flights were cancelled and 23,700 tonnes of CO2 were stopped at source. It was arguably the single most effective direct action against greenhouse gas emissions to date.

As intended, PS have also focused support on autonomous groups around the country who have been taking the initiative for action at regional or small airports. Southampton set up their own group from scratch, and launched with a ‘climate refugee camp’ outside Southampton airport, shutting down part of the lobby.

PS activists in Manchester invaded the annual industry aviation conference, disrupting their photo call and dropped a banner at their Gala dinner latter that evening, in addition to staging a flash mob inside Manchester airport.

PS activists in Brighton confronted Ed Milliband as he spoke there, which directly resulted in the local Labour MP coming out against airport expansion. London Plane Stupid, who organise separately from Plane Stupid National, broke into City airport and formed a ‘human wheel clamp’ round a private jet. Later in the year they staged a noise protest to mark the occasion of the first-ever transatlantic route from the airport; and a hill under the flight-path was repeatedly sprayed with the giant message ‘Climate Crime’.

In Scotland, Aberdeen airport taxiway was occupied by 9 protesters, who stopped over 19 flights. Activists also organised their own ‘sting’ on undercover police who were trying to bully campaigners into becoming informers. The story made news across the country.

PS continue to expand their work, collaboratin with new partner organisations, such a Action Against Agrofuels who gatecrashed Virgin Atlantic’s Anniversary flight party: the roof of Terminal 2 was occupied by stewardesses in drag, who explained the problems with biofuels to amused travellers.

PS also had a significant presence at the European anti-aviation campaigners’ conference, where their presentations on direct action were met with an increasingly warm reception and new alliances were initiated.

In line with PS’s aims to develop new skills within the network, they have conducted 4 media training sessions for a wide variety of activists, most of whom had little or no previous experience, and who have gone on to represent the group in print, TV and radio.

They have also ensured new activists were equipped to go out and give introductory presentations about direct action and climate change, with campaigners speaking about PS’s work in places as varied as public meetings in Germany and the South Bank Centre, to audiences ranging from GCSE students to the National Council of Volunteers.

PS has improved its communications links to ensure that the latest developments aren’t missed. As a result PS were able seize opportunities as they arose and challenge policy makers when they least expected it.

Geoff Hoon was disrupted by air-horn ‘human lie detectors’ as he tried to make a presentation to the Royal Society about ‘sustainable aviation’ and Peter Mandleson was covered in green custard just days after pushing through the decision for a third runway at Heathrow.

More recently PS high jacked Virgin’s table at the PR Awards in Grosvenor House, and disrupted the Architects Awards. On both occasions local women from Heathrow villages were invited along, and with the support of Plane Stupid activists were able to bring their immediate concerns to those complicit in their predicament.

Broadening opportunities for wider participation in direct action is still central to PS’s aims and these actions were the result of the ground- breaking ‘Adopt a Resident’ scheme which was launched early in the summer, teaming up residents under threat with affinity groups from across the country.