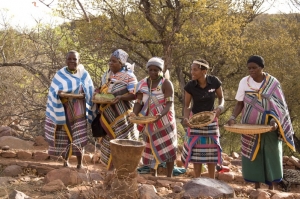 The women “Rainmakers” of Venda, South Africa help to protect their sacred forests and resist the forces which threaten their future.

Venda (or Vhembe District) in Limpopo Province, South Africa is famous for its biodiversity and cultural richness. Its sacred sites are watched over by the elder women of the communities, known as Makhadzis. These women have come to be known as the “Rainmakers” of South Africa, due to the capacity of their cultural rituals to invite rain to the area.

Years of colonisation and the encroachment of the western world on traditional cultures have meant that the Makhadzis became increasingly marginalised and silenced; their traditional roles  as advisors to the chiefs and as keepers of the indigenous seeds, were undermined. But now, with support from The Mupo Foundation, a South African NGO, the Makhadzis are finding their voice once again. They are rallying to protect Venda’s network of sacred forests, and to set an important legal precedent for South Africa’s natural and cultural heritage.

In 2009, the Makhadzis were joined by the elder men and chiefs of the community to form Dzomo la Mupo (meaning Voice of the Earth), a small community-based organisation, “To protect Nature in all her forms, and especially indigenous forests … [and] to protect and preserve sacred sites in Venda”. The Mupo Foundation is backing them in this task.

A ‘Rainmaker’ elder at workThere exists a small network of bountiful forests in Venda, the source of springs that feed into the Luvuvhu river. The river catchment provides water for the surrounding land and communities, and the forests are revered as sacred; they are places where the ancestors reside and where peace must be maintained. It is the responsibility of the Makhadzis, as the traditional custodians of these sacred forests, to ensure that they are safeguarded and respected.

Until recently, tourism, plantations and development projects have been the main threats to the sacred forests in Venda. Last year, the Makhadzis and the Ramunangi clan were featured in BBC World News for their courageous stand against developers building a tourism complex that is destroying Phiphidi sacred waterfall and forest. But, just as the Makhadzis deal with one choking pressure, they are faced with another. Huge coal mining projects – among the worst contributor’s to global climate change – are being planned across Limpopo province. They threaten to devour much of the Venda region, and the future of the Makhadzhis, their communities and the forests is under serious threat.

With this grant from APE, Dzomo la Mupo will receive para-legal training to build confidence and capacity to assert their customary, constitutional and legal rights. They will develop materials – maps, socio-cultural and ecological profiles, Claim of Rights – for the recognition and protection of their sacred community forests.

This support to the Makhadzis as custodians of Venda’s sacred forests and as holders of traditional knowledge, is a direct contribution to climate change resilience.

Makhadzi WomenOur project’s aims were to enable Venda’s women elders, known as the Makhadzi, to better understand their cultural and environmental rights within the South African Constitution, increase their confidence to demand those rights nationally and internationally and through legal registration, gain protection for three scared community forests in Venda. Community forests belong to the indigenous vhaVenda people and are governed by customary laws overseen by community elders. The Makahdzi are responsible for the associated rituals that maintain order both in the community and the ecosystem.  However, in recent years, community forests in Venda are under threat from mining and tourism development companies that do nor recognise not respect the vhaVenda’s customary laws.

The project worked to enable the Makhadzi to have the capacity and confidence to take a legal stand and use the legal route to secure protection for their sacred forests under South African law. The challenges to the task were immense. The Makhadzi, with the support of human rights firm, Chennells Albertyn, had to come to grips with the South African legal system and understand how their rights as indigenous custodians are recognised. Through a series of community dialogues and workshops, the customary principles for safeguarding Venda’s sacred sites, previously only held as part of the communities’ oral tradition, were documented in English and in Venda. This was ground breaking. It was the first time the vhaVenda were documenting their history and links to their environment from their point of view.

With the support of The Gaia Foundation, a London-based charity, The Mupo Foundation and the Makhadzi have now completed an application dossier to formally register three sacred sites with the South Africa Heritage Resource Agency (SAHRA). It is the culmination of hundreds of hours of dedicated work: negotiations, dialogue, and discussions with the Makhadzi to ensure that they fully understand and approve the full contents of the documentation. We are hopeful for a successful outcome that will set a precedent for registering the other remaining forests within the network.

The process reinvigorating whole communities had has since inspired four other communities to approach The Mupo Foundation to initiate a similar process for their sacred natural sites. It has also enable the Makhadzito challenge new threats to their sacred forests, such a coal mining.

Since funding this project, we are delighted to annouce that Mphatheleni Makaulule from the MUPO Foundation has been awarded Global Leadership Award in New York. Click here for more details.

Animation to generate funding for tree planting activities by the Makhadzi:

Other short films about Mupo’s work are available here:

We are of course delighted to receive this grant in a very competitive funding world. It is also recognition of the value of what we do for the global community and for this we are grateful. To us, saving our community forests is urgent and vitally important because it is about our very life, our future existence on earth. But we also know that by protecting these last remaining sacred forests and honouring their meaning as sacred places on the earth, we do it for everyone. Climate change has showed us the ancient wisdom that the world, the universe is one interconnected space.

As we are now faced with the destructive forces of huge open pit coal mines, we must act urgently. This grant will help us support the communities in this struggle. As they said in a letter to the South African Government: “The future of the planet depends on us. We might be the last generation to save it. And the coming generation will look up to your office as the one that failed them. “

Thank you for your support