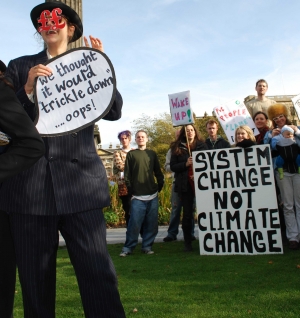 A campaign against hydraulic fracturing in Scotland.

Friends of the Earth Scotland was alarmed to learn that Aussie giant Dart Energy were advancing their most developed European coalbed methane project near the small town of Airth in the Forth Valley. Following a number of years of quiet exploration and testing, during which around 14 test wells were drilled, Dart Energy aimed for early commercialisation of the project in 2012. 1

The problem wasn’t confined to Airth either. The village of Canonbie in Dumfries and Galloway saw around 20 planning applications relating to another coalbed methane development by Greenpark Energy – now owned by Dart – the first company to get permission to undertake hydraulic fracturing (fracking) in Scotland. One of the key concerns was the threat that unconventional gas extraction and fracking poses to Scotland’s ability to meet our climate reduction targets by 2020, as gas obtained this way is likely to have a greenhouse gas footprint which is significantly worse than conventional gas, and potentially even as bad as coal.

Another key concern was the risks to the local water environment from methane leakage from wells and the chemicals used in some extraction methods. In addition there are serious concerns about the lack of up-front information in planning applications and consultation with local communities, who in some circumstances may have been completely unaware of the real nature of local developments.

When we were approached by local people to develop resources and generate awareness about fracking and unconventional gas extraction, we knew this issued needed to become a campaigning priority for FoES. And with the support of generous funders like APE, we were able to begin our fight against this growing threat to Scottish communities and our environment. As we begun to undertake this work, we soon realised that there was a serious research gap in regards to the potential effects of unconventional gas extraction in Scotland. We decided to start plugging this gap and in April 2012, we published a much-needed and well-received desktop research briefing in a detailed and summary version.

Our research revealed that coalbed methane was an overlooked issue in the shale gas dominated headlines. The media focus in the UK – and worldwide – has been on the hydraulic fracturing – fracking — of shale gas. However, in Scotland the key threat is from coalbed methane (CBM) extraction, which may or may not involve fracking, but is still very risky.

FoES was able to focus the debate in Scotland on coalbed methane, away from the media storm around shale gas. We also raised the profile of CBM at EU level. Our research briefing was disseminated by colleagues in FoE Europe and has resulted in proposed amendments to two European Parliament reports to include coalbed methane alongside shale. This is essential to ensure that coalbed methane developments don’t slip under the radar of public scrutiny!

Meanwhile, with the support of funders like APE, our Activism and Outreach Officer started building a network of activists who understood the issue and were inspired to take action. We have been absolutely delighted in the amount of public support this campaign generated. We have spoken to community councils and held a public meeting in an area vulnerable to unconventional gas extraction. We have produced resources, given advice, held workshops with key activists and environmental organisations in Scotland and raised the profile of the issue in the media. We have also given advice to groups in Belgium and South Africa that are dealing with similar issues. We have had repeated requests for support from members of the public and our members and local groups who are concerned about the issue. We have also briefed MSPs and discussed unconventional gas issues with key opposition MSPs to start to raise the issue at a national level in Scotland.

Going forward, we have some exciting plans to address the growing threat posed by unconventional gas extraction in Scotland. Building on research and resources developed in our pilot campaign, we want to encourage communities to designate themselves as “Coalbed methane and fracking free” zones. Similar efforts in Australia have met with great success in mobilising communities to stand up for their right to a healthy environment. Community activists would work to get local individuals, businesses, schools and the local authority on board to declare unequivocally to unconventional gas companies that this kind of development is not wanted.

We are incredibly grateful to APE for helping us to empower Scottish communities to resist the serious threat posed by unconventional gas extraction.

Friends of the Earth Scotland is delighted to receive financial support from APE for the first major Scottish anti-fracking campaign, Quit Fracking Aboot. The money enables our small charity to work with local people to raise awareness of the very real threat the first applications to frack in Scotland represent, whilst calling for a moratorium on fracking in Scotland. When we told one local campaigner APE were supporting us his email response contained only two words: GREAT NEWS! Thank you so much for seeing the benefit of standing with ordinary people against huge international fossil fuel companies!