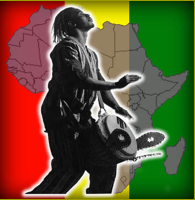 The United Nations climate talks have unfortunately been just that for 16 years – just talk and no real action, the most famous of these so far being the failed conference in Copenhagen in 2009. After the deep disappointment of Copenhagen, a South African anti-apartheid activist teasingly noted that the talks had failed because the climate movement didn’t have a song!

For the 17th conference in Durban this December, we didn’t want to make the same mistake twice! A group of leading musicians throughout Africa and other parts of the world got together to create a song that both tells the truth about how hard climate change is affecting Africa and that also inspires people to join together to create a brighter future for everyone.
Africa is the continent that is most vulnerable to climate change (according to the recent Maplecroft report, of the world’s most highly vulnerable countries, approximately two-thirds are located in Africa). These impacts include more severe droughts, increasing deserts, worsening storms that damage people’s croplands, and sea level rise affecting the coastal communities.  People in the Eastern Horn of Africa are already being forced off their homelands due to the drought and famine made worse by climate change.
The African continent also has a rich history and recent past of fighting injustice, of creativity, of perseverance, of communal caring, and of traditional wisdom of living in harmony with nature. And it is the birthplace of humanity – all people, the world over, carry memories of Africa in their cells.
By filling the airwaves around the globe with the power of song and story, maybe we can reignite some of these memories and remind people of the power we have when we stand together. Together we can overcome climate change. Together we can create a brighter future!
“Africans have this thing called ‘ubuntu’. It is about the essence of being human, it is part of the gift that Africa will give the world. We believe that a person is a person through another person: that my humanity is bound up, inextricably, with yours. When I dehumanise you, I inexorably dehumanise myself. The solitary human being is a contradiction in terms and therefore you seek to work for the common good because your humanity comes into its own in belonging.” – Archbishop Emeritus Desmond Tutu, member of The Elders
“Global warming is set to make many of the problems which Africa already deals with, much, much worse. …The great tragedy is that Africa has played virtually no role in global warming, a problem caused by economic activity of the rich, industrial countries.” – Andrew Simms, New Economics Foundation
“A people are as healthy and confident as the stories they tell themselves. Stories can conquer fear, you know. They can make the heart larger.”- Ben Okri, Nigerian poet and novelist
People Power Written By: Marie Daulne (Democratic Republic of Congo/Belgium), Angelique Kidjo (Benin), Talib Kweli (U.S.), Zolani Mahola (South Africa), Eugene Skeef (South Africa), Ahmed Soultan (Morocco), Anthony Tidd (U.S.), Jabulani Tsambo (South Africa)
Singers: Marcina Arnold (South Africa), Marie Daulne (Democratic Republic of Congo/Belgium), KGzm (South Africa), Angelique Kidjo (Benin), Talib Kweli (U.S.), Zolani Mahola (South Africa), Busi Moreng (South Africa), Eugene Skeef (South Africa), Ahmed Soultan (Morocco), Jabulani Tsambo (South Africa)
Instruments: Yaw Asumadu – djembe, dondo, kpanlogo drums (Ghana); Tinotenda Dambaneunga – drums (South Africa); Hassan Erraji – oud, darabuka, bendir (Morocco); Sonah Jobarteh – kora (Gambia/U.K.); bra Themba Mokoena – guitar (South Africa); Korey Riker – tenor sax, baritone sax (U.S.); Gama Sibeko – percussion (South Africa); Ahmed Soultan – Rik, Derbuka, Tarra and clap (Morocco); Anthony Tidd – guitar, bass, keyboard (U.S.); Steve Tirpak – trombone, trumpet (U.S.).
Engineers: Zarma (JoBurg), Alex Beitzke (London), Tyler Harman (NYC)
Produced and Mixed by: Anthony Tidd
Production Assistant: Eugene Skeef
Project Coordinator: Heidi Quante, 350.org eARTh
Created in Collaboration with Okayafrica, Rhythm of Change (ROC)
With Big Heartfelt Thanks To: Artists Project Earth (APE), DJ Spooky, Jamie Catto, Alex Forster.