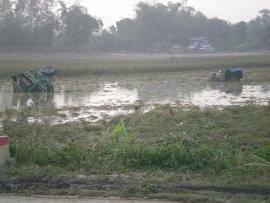 Disaster Relief for the Philippines

The Serve the People Brigade-Cordillera Disaster Response was able to support 388 families in Baguio City and 281 families in Tublay and Itogon Benguet after Typhoon Pepeng struck in October 2010. Families were provided with much-needed food supplies especially rice as well as medicines and housing materials. Relief operations have also been carried out in Labilab, Loacan, Itogon, benefiting hundreds more families. Many families claimed that the Brigade’s mission was the first to come to their aid after Typhoon Pepeng.

The serve the People Brigade-Cordillera Disaster Response is a joint project of the Center for Development Projects in the Cordillera (CDPC) and Cordillera Peoples Alliance (CPA).