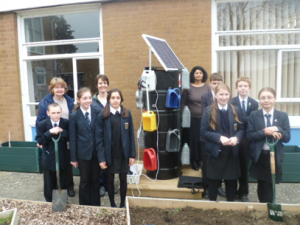 A memorial to oil.

Pupils and teachers at Shipston-Upon-Stour High School constructed a ‘Transition Tower’ which displays objects and ideas showing the transition from an oil-based economy to a more sustainable future.

The tower has 12 containers made from oil cans, which are attached to the side. These display objects from the ‘oil age’ including everyday items that are made entirely or partly from oil-based materials or that consume large amounts of fossil fuels in their manufacture or subsequent uses. These change to low carbon objects, plants such as herbs and ideas for the future, as the tower rises. It will also display artwork to highlighting aspects of ‘peak oil’ and climate change.

The completed tower is around 3.5 metres tall with fixing points to hang objects on. The display is topped-off with a solar panel. The design of the tower was carried out by Transition Shipston members. The schoolchildren and teachers at Shipston High school have decided to connect the output from the solar panel to a water pump to power a water fountain. The fountain will be in a pond to be made in the school vegetable plot. All the equipment for this has now been purchased. The assembly was constructed by a professional craftsman for safety reasons. The schoolchildren have hung their own designs on the structure for display.

The tower is now the centre-piece of the Shipston High School garden. It was also on display to the public at the Shipston Harvest Fayre which was organised by Transition Shipston.

The photo shows the Transition Tower at Shipston High School with the children getting ready to dig a pond, which will have a fountain that is powered by the solar panel on the tower. Also in the photo is Farah Ahmed the teacher who runs the EcoClub plus Jenny and Jo who are volunteers.