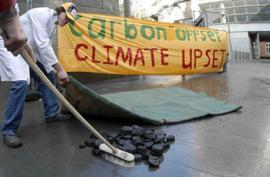 Rising Tide is a grassroots network of independent groups and individuals committed to taking action and building a movement against climate change. They have the resources to enable people both within and outside its network to run workshops (RT Workshop Resource Pack) and have experts in areas such as Direct Action, Legal Training, Community Engagement, Media, and Meeting Facilitation.

Rising Tide groups continue to be very involved with the Camp for Climate Action and participated in the national day of action against the Royal Bank of Scotland (“the oil and gas bank”) which involved 23 actions across the UK. They were involved in the three International days of action in 2008. The biggest of which was Fossils Fools Day, which comprised 35 Actions in the UK and a couple of dozen in North America, Australasia and South Africa.

The project will enable five new local groups to engage in a wider programme of direct action against climate change, alongside workshops and information events in places not thought to be hotbeds of political activity.  By supporting these new local groups financially, the project will allow them time to do what they are formed for: taking action on climate change, rather than organising fund raising events which stop the group from taking action, which in turn can lead to low-morale and disintegration, especially in new groups.