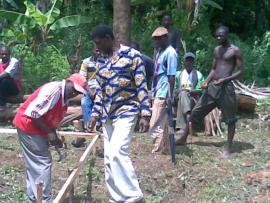 The Sustained Action Against Climate Change (SAACC) Project is being executed within 33 municipalities in the North West Region of Cameroon. In each of these municipalities, project activities evolve through five stages:

The objective of the CRM exercise is to enable community members better appreciate how the effects of climate change translates into their own local contexts. This opens them up to search for solutions within and to take action.

•    Forum Theatre Sessions: Part of the data collected during the CRM is used by specialised script writers to adapt a prewritten forum theatre script as well as the contents of a community game-show to suit the context of the community in question. The game-show preselects community members who will answer questions on thematic issues relating to climate change in front of an audience as a way of encouraging the community members to debate such issues within the community for always. Prizes are given to winners comprising varied items such as mattresses to motivate them. The game-show is equally recorded to constitute part of a radio programme to be broadcast over five selected and widely listened radio stations. The adapted forum theatre is produced along with the community game-shows in two locations within each community attended by huge numbers of mobilised community members. At the end of each show, community members are asked questions and engaged in productive discussions and are reminded to listen to the broadcast version over the various identified radio stations.

•    Radio Programme: The third stage comprises the broadcast of a 30 minutes radio program made up of two components. A pre-recorded version of the community game-show and a 15 minutes serial drama on climate change.

•    Tree Planting Drive: This involves the planting of trees within preselected areas in collaboration with local councils following tree-planting accords signed with them. A total of 5 million trees will be planted within 33 selected municipalities. The tree planting drive constitutes part of OFLIC’s ambitious 50 million trees programme to be planted over the next five years.

The game-shows, forum theatre as well as the radio programmes will be used as tools to aid the community members through the process of looking for their own green solutions to the problems identified. These efforts will be crowned by a vigorous tree-planting stage that will ensure the planting of 5 million trees as a means of sequestrating greenhouse gasses (carbon-dioxide) as well as rehabilitating identified water catchment areas that are already suffering the effects of climate change.

We have been overjoyed within the ranks of OFLIC to receive this assistance from APE. While promising to use the funds for the project for which it was given, we are certain that it will go a long way to assisting the target communities in Cameroon to seek lasting solutions to the problems posed by Climate Change. We thus, thank APE for this timely support which is a major step in a long-term effort to mitigate the adverse effects of climate change for the benefit of both local and global communities. We are really grateful.