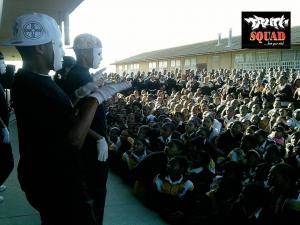 “That Ain’t Cool” Global Warming Awareness Campaign was initiated out of the desire to educate and inform pupils in South African high schools about climate change. Many awareness programmes currently run within our communities, but focus on drugs, gangsterism,violence etc. – and whilst that is also much needed in our communities, it is also important that we should focus on environmental issues, especially with the extreme weather conditions experienced in South Africa and in particular the Nelson Mandela Bay area.

High schools are fertile ground for such iniatives as young people are the leaders of tomorrow, so the aim is to educate them today so they can make the relevant decisions tomorrow. The initiative, because of our involvement over the years in the arts, has seen artists (dancers, poets, rappers etc) go out to schools and use their craft to “edutain” the scholars. This method was proven to be very effective, as the pupils could relate to who they see, but also accept what was being said through the performances. The “edutainment” was coupled with workshops which, through presentations and pictures, created a more ‘serious’ message about the cause and effects of climate change.

Because this was a pilot project, we faced various logistical problems and lack of support.Our communities don’t yet see the importance of looking after our environment, so our environment can look after us. Due to this, the project was not seen as high priority, but we strongly believe the project made positive impact on the schools we reached which is evidenced as the schools are cleaner, recycling happening there now etc.