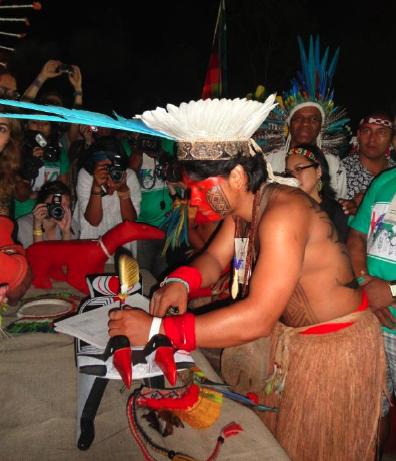 While world leaders still struggle to find sustainable solutions to the current multiple ecological, economic, environmental and climatic crisis, the global indigenous community, including the Cordillera Peoples Alliance, adopted on June 18, 2012 the Kari-Oca II Declaration for creating the future indigenous peoples want. The Declaration is a result of discussions in the World Indigenous Peoples Conference on Territories, Rights and Sustainable Development (Kari-Oca II) held in Jacarepagua, Rio de Janeiro from June 13-22, 2012.

According to CPA Chairperson Windel Bolinget, “Now, more than ever, the world must draw on the traditional wisdom and cultural heritage of indigenous peoples if we are to move forward for our common future. Indigenous peoples’ knowledge and ways of living offer viable solutions to the economic, ecological, spiritual and cultural crisis humanity is currently facing.”

Indigenous groups from Brazil who are hosting the World Indigenous Peoples Conference on Territories, Rights and Sustainable Development (Kari-Oca II) led an indigenous ceremony in the evening of June 18 to affirm the Declaration, after which over 500 leaders and representatives from all over the world, including the Cordillera Peoples Alliance, signed the declaration.

Bolinget also explained that from the indigenous peoples’ experiences for the past 20 years since the Earth Summit in 1992, problems were aggravated by the collaboration between governments and big corporations in pursuing ‘destructive’ projects and the non-recognition of our rights as indigenous peoples. This situation has compelled the indigenous peoples of the world, to advance their struggles for self-determination and

liberation. It is in this context that indigenous peoples worldwide formed a strong declaration after 20 years since the first Kari-Oca in 1992 of which CPA had been part of.

In the Kari-Oca II Declaration, indigenous peoples describe the Green Economy as “capitalism of nature; a perverse attempt by corporations, extractive industries and governments to cash in on Creation by privatizing, commodifying, and selling off the Sacred and all forms of life and the sky.” The Declaration also lays down solutions to the current crisis. Among these, “Society must take collective control of productive resources to meet the needs of sustainable social development and avoid overproduction, overconsumption and overexploitation of people and nature which are inevitable under the prevailing monopoly capitalist system. We must focus on sustainable communities based on indigenous knowledge, not on capitalist development”.

On June 21, 2012, the Kari-Oca 2 participants garbed in traditional attires and armed with strong will and solidarity in advancing their struggles will march to the Rio Centro where the United Nations Conference on Sustainable Development (Rio+20) negotiations are taking place, to deliver the Declaration to the Brazilian delegation chairing the UNCSD (Rio+20) negotiations and high level United Nations officials.

Kari-Oca II is co-organized by Land is Life, Indigenous Environment Network, Cordillera Peoples Alliance, and hosted by Inter Tribal Committee of Brazil. It is supported by the Ministry of Sports of the Government of Brazil. Among the participants are Igorots representing the Cordillera Peoples Alliance, Innabuyog-Gabriela, Indigenous Peoples Movement for Self-determination and Asia Pacific Indigenous Youth Network.