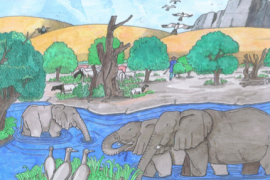 “If the elephants disappear, it means the ecosystem is no longer good for humans.” – Quote by a Malian villager

The project began in 2003 with a focus on this internationally important population of elephants, but it soon became clear that the fates of the ecosystem, its population and elephants were intertwined. These elephants are the most northerly population in existence, the last significant population of Sahelian elephants, and make the longest migration of any elephants in the world. Scientific studies since 2003 have shown how this 600km annual migration enables the elephants to cope with the widely dispersed and variable nature of the region’s resources, and identified the threats to their survival.

These are the same as the threats to the livelihoods of the local population and the resilience of the ecosystem to cope with climate change, and are largely due to the uncontrolled use of natural resources that is causing environmental degradation, impoverished livelihoods, a loss of ecosystem resilience, and an increase in human-elephant conflict.

The project forms partnerships with all stakeholders to build a concerted approach. These range from national government departments to local communities; and include NGOS and projects working in the area; local government technical services, community structures and representatives, both traditional and elected; as well as visitors to the area. Engagement at national level involves support in strategy, policy and planning. At the local level we aim to mobilize of all sectors of the local community to manage and restore the ecosystems of the Gourma through establishing sustainable community-based resource management systems that increase resource availability, generate income, prevent degradation, and accommodate elephant needs.

We use a consensus process to devise conventions that place the resources of the area under the control of the local community and articulate how resources are to be managed to prevent over-exploitation. We bring local communities together to devise management systems that restore ecosystem resilience to climate change, increase resource availability for local livelihoods, generate income, reverse degradation, and accommodate elephant needs

PROJECT UPDATE – JANUARY 2012: This project began with studies to understand why this population of elephants had survived when all others in the sub-desert/sahelian latitudes had disappeared, and how to assure their survival. In getting to the bottom of this question we discovered that the fate of the elephants, the ecosystem and the livelihoods of the people were inextricably linked, and that we had about five years to turn things around.

We found ourselves drawn into a fascinating and complex socio-ecological system that wove together the natural ecosystem, the livelihoods of its inhabitants, national socio-politics and international economic forces. “The villagers understood that the elephants are an indicator of the health of the ecosystem, and that the forces causing the demise of the elephants will impact on humans, as demonstrated by this quote from a Malian villager “If the elephants disappear, it means the ecosystem is no longer good for humans.”

A big problem is that ethnicities do not tend to recognize the natural resource management systems of another ethnicity, which leads to a free-for-all and resource degradation. The Mali Elephant Project is bringing the diverse clans and ethnicities together to agree community-based systems to manage their natural resources sustainably and regenerate the ecosystem. The main technology used is community meetings ….. and lots of them! This is because no solutions will work unless everyone agrees and everyone has had the opportunity to contribute.

At around 40,000km2 the elephant range is vast, and so we began in the top priority area, Lake Banzena. This is the last accessible water for elephants at the end of the dry season and the lynch-pin of the migration. Increasing human and livestock pressure caused the lake to dry in 2009 causing a crisis for the elephants.

To ensure this situation did not occur again The WILD Foundation raised money for a study of the situation at the lake, and in particular a consultative socio-economic study of the population using Lake Banzena, both resident and transhumant. The aim was to produce a plan that would accommodate elephant needs, avoid exacerbating social tensions, and be supported by the whole community. A key finding was that 96% of the cattle using the lake during this time belonged to “prestige” herds owned by affluent individuals coming mostly from the towns of the Niger river. Another important discovery was that over 50% of the resident population suffered from water-borne disease.

The plan involved relocating to an area outside the elephant range with abundant pasture, if three water-points could be provided, and placing the resources of the area under the control of the local community using traditional structures. This allowed them to limit use if necessary, to charge others for access to resources, and included provision for elephant needs. The management committee’s first action was to designate a 40,000 hectare pastoral reserve. This was spontaneously added to by adjacent communities to make a total of 923,800 hectares. Protected by fire-breaks, this area was the only part of the northern Gourma not to lose its pasture in bush fires in 2010.

It is so far working better than we ever hoped, and there have been some unexpected developments along the way: