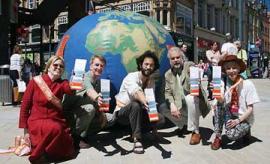 Trade Injustice and Debt Action Leeds (TIDAL) was established in the wake of the Jubilee 2000 Debt campaign and succeeded in making Leeds a Fair Trade City.

In 2006 TIDAL set up Stop Climate Chaos Leeds (SCCLeeds) to campaign specifically on the issue Climate Change. In 2007 TIDAL was granted, £5,000 to employ a SCCLeeds worker for one day per week for a year and because of this SCCLeeds has been able to mobilise far more of the public in addressing the problem as individuals in their homes and as citizens of Leeds.

Co-ordinator for Stop Climate Chaos Leeds will ensure the continued effectiveness of the group as a whole and enable SCCLeeds to lobby councillors, MPs (including DEFRA minister Hilary Benn) and MEPs and empower people to change themselves and the bodies which represent them.  The co-ordinator will be instrumental in the planning and administration of these activities.

The aim is to increase pressure in 2008-2009 on MPs to provide a tougher Climate Change Bill and encourage Leeds City Council to deliver a meaningful Climate Change Strategy. Already in the pipeline from September 2008 are plans for a mass “freeze” in the city centre, a Question Time debate, more visits to MPs, candidate “green ratings” for the next general election, and ways to engage hard-to-reach groups.

“We were absolutely thrilled to be granted funding through APE. We’ll be able to employ a new worker – that’s something that no-one else would give us money for but which we really needed. We have lots of big plans for the coming year and now we’ll be able to achieve our goals. The APE funding came through in the nick of time so now we’re really excited about getting the message out about global warming to the peolpe of Leeds.” Stop Climate Chaos Leeds