“To anyone who continues to deny the reality that is climate change, I dare you to pay a visit to the Philippines right now.” – Yeb Sano, Philippines lead negotiator at UNFCC COP19

Super Typhoon Haiyan has been described by experts as the strongest typhoon that has ever made landfall in the course of recorded human history. It was so strong that if there was a Category 6, it would have fallen squarely in that box. Two-thirds of the Philippines is devastated, with millions of people now rendered homeless and with scenes reminiscent of the aftermath of the Asian tsunami: a vast wasteland of mud, and debris, and dead bodies. Despite the massive efforts that the Philippines exerted in preparing for the onslaught of this monster of a storm, it was just too powerful and even as a nation familiar with storms, Haiyan was like nothing ever experienced before. The destruction is colossal.

Typhoons such as Haiyan and its impacts represent a sobering reminder to the international community that we cannot afford to procrastinate on climate action. The suffering that the Philippines is going through is likely to be repeated in other countries around the world. Science tells us simply that climate change will mean more intense tropical storms. As the oceans warm, the energy that is stored in the water will increase the intensity of typhoons and the trend we now see is that more destructive storms like Typhoon Haiyan will be the new norm. 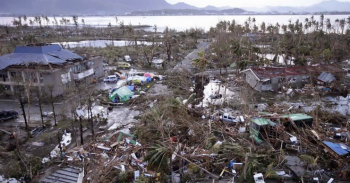 The devastation caused by Super Typhoon Haiyan is similar to that wreaked by the Asian Tsunami of 2004.Whilst activists, environmentalists, NGOs and governments work to bring about a globally binding process to address climate change at the UNFCC COP19 – people in the Philippines are at this moment, suffering the consequences of our inaction.

APE has sent an initial donation for immediate disaster relief to Bagong Alyansang Makabayan (BAYAN) who are working on the ground with indigenous communities, fisherfolk and the poorest people in the affected areas, to provide food, clothing, medicines, clean water and shelter. APE is continuing to fundraise for relief operations in the Philippines, through the Typhoon Haiyan Relief Appeal. All donations over £10 will recieve a free download of Rhythms Del Mundo: Haiyan Relief, featuring, Sting, Jack Johnson, Rokia Traore, Arctic Monkeys and many other. Please give generously – thank you.