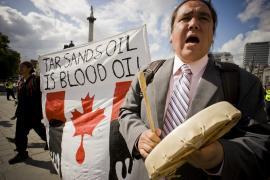 Fighting against “the world’s most destructive industry”

The UK Tar Sands Network plans to launch a new campaign exposing the UK government’s support for the export of Tar Sands oil to Europe for the first time. The EU-Canada Free Trade Agreement is currently in negotiation but there is little public knowledge of its potential to dramatically increase the global market for Tar Sands oil and to give more rights to European companies and investors to trample over the rights of indigenous communities, in their quest for oil.

Through direct action, lobbying, media work, public awareness-raising and networking, we plan to stick a spanner in the works of these shady negotiations before they can be completed. As well as having a direct impact on the Tar Sands industry, this will also help heighten public and media interest in the Tar Sands issue.

Over the last year, with APE’s support, we have built a powerful public campaign in the UK calling for the Tar Sands to be shut down. Working in partnership with affected First Nations and the Indigenous Environmental Network in Canada, we have successfully targeted BP, Shell and RBS, putting the Tar Sands issue firmly on the agenda of the UK climate movement. We now plan to mobilise our national network of supporters and work with our grassroots and NGO partners to target the UK coalition government’s support for Tar Sands extraction and export. We have also begun to build links with other European groups who are campaigning on Tar Sands and aim to begin building a pan-European coalition, working in partnership with Canadian organisations.

The Alberta tar sands are the biggest, most destructive, most energy-intensive fossil fuel project in the world today. There is a growing consensus amongst campaigners and climate scientists that aiming for percentage reductions in global emissions cannot succeed without a comprehensive commitment to leaving fossil fuels in the ground. Leading climate scientist James Hansen has unequivocally stated that it will not be possible to avoid runaway climate change unless we completely cease Tar Sands extraction.

Given that some of the biggest companies operating in the sands are British, much of the finance is flowing from our investment institutions and the new British government has come out in support of the project, we have a responsibility to play our part in the global campaign to shut the whole project down.

APE provided the UK Tar Sands Network with funding to launch a new campaign. Called ‘Keep Europe out of the Tar Sands’, it exposes the fact that the EU and Canada are currently negotiating a free trade agreement, behind closed doors, which could dramatically increase Europe’s involvement in the tar sands. The trade talks, known as CETA, are proceeding rapidly, but there is currently little public knowledge of their potential to allow Tar Sands oil into Europe, to trample Indigenous rights, and to give even more power to European oil giants like BP and Shell to exploit the Tar Sands and destroy the planet.

So, through direct action, lobbying, media work, public awareness raising and networking, we set out to stick a spanner in the works of these shady negotiations before they could be completed.

We focused our efforts around the January 2011 round of CETA negotiations in Brussels. First of all, in partnership with the Council of Canadians and the Indigenous Environmental Network, we published a popular briefing on CETA and the tar sands which included a set of policy asks – the first publication to address this dimension of the trade talks. Click here to read the report.

Then, the Thursday before the talks began, a group of us invaded the UK Department for Business, Innovation and Skills and demanded a meeting with the Minister for Trade to express our concerns, refusing to leave until we got one and instead holding a noisy teach-in about CETA and the tar sands in the lobby. We made a film of the action that was then spread widely through social media and served as an introduction to the issues.

We then went to Brussels for the launch of the negotiations and, along with our Canadian, Indigenous and European partners, held a protest outside the negotiations and a series of well-attended lobbying meetings with MEPs. We press released the two actions in the EU and Canada, which resulted in both of them being mentioned in major media stories that came out about the negotiations, effectively situating tar sands as an issue within the trade talks where it had been absent before. We also subsequently got this good piece in the Guardian.

We followed up with an e-action to MEPs, several lobbying meetings and another protest targeting the Alberta Energy Minister on a lobbying trip to the UK.

But this is just the first stage of our campaign. The trade talks are continuing, and are due to be completed by the end of this year. So we plan to be in Brussels for the next round of negotiations in July 2011 to further raise awareness of the severe dangers to the climate, local environment and Indigenous rights that these negotiations could cause. Keep an eye on our website for the latest news, or find us on Facebook (No Tar Sands) and Twitter (@NoTarSands)