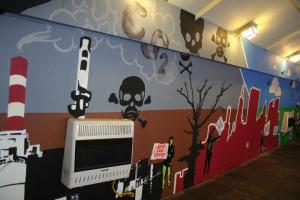 Raising social awareness and environmental justice through the arts

On December 7th 2010 – an International Day of Action for Climate Justice which coincided with the UN COP16 climate talks in Cancun, Mexico – the Little Village Environmental Justice Organization (LVEJO) and local artists unveiled a new mural depicting the struggle for environmental justice in Chicago’s Little Village. Community members, climate activists and public health experts who have been working together to clean-up two local coal-fired power plants in the area attended the mural unveiling which tells the story of their struggle in pictorial form.

Community-based networks all over the world are leading a global Climate Justice movement to confront the root causes of climate change, while defining community priorities and self-determined pathways for a new energy economy. In Little Village, this means cleaning up and retrofitting the coal-fired power plants, and increasing funds for social services, open space and community gardens that build local food security. Community organizer Ian Viteri states, “The Midwest Generation coal plants are the greatest source of air pollution and greenhouse gas emissions in Chicago, and cause a host of health issues such as asthma, respiratory disease and cancer. Rather than focusing on carbon trading and other false solutions to climate change, the UN should be working to shut down major polluters like Midwest Generation.”

The Little Village Environmental Justice Organization is a community based non profit initiative that focuses on environmental justice. Their model for climate justice and leadership development is through empowering and organizing individuals and families that live in the neighborhood especially those that are directly affected by climate change. LVEJO believes that the families directly affected by climate change have the solutions within them to approach these environmental challenges.

LVEJO used the Mexican tradition of mural paintings as an effective medium to raise social awareness on climate change and the need for environmental justice in Chicago’s ‘Little Village’ neighborhood, the second largest Mexican-American ethnic enclave in the US.  Murals are commonly used as effective vehicle for political and social messages in many Latin American cultural traditions. LVEJO use this cultural tradition to spread its mission of environmental justice and the need for climate change.

The murals will be highlighted as landmarks in LVEJO’s  ‘Community Asset Toxic Tours’, a neighborhood tour that teaches about issues of Climate Justice. The murals will be used as effective and culturally appropriate mediums to deliver LVEJO’s environmental justice and climate change message.

LVEJO and Chicago’s Little Village neighborhood is suffering from the ill effects of climate change. After a century of industrialization, the neighborhood unfortunately inherited toxic wastes from the abandoned factories and century old coal power plants that still continue to run today.  In 2008, data shows that the neighborhood recorded the second worst air quality in the entire Chicago metropolitan area. The children living in ‘The Little Village’ have one of the highest incidences of lead poisoning and asthma related diseases. In addition to these environmental hazards, the largely Latino immigrant families that live in the area are faced with limited English proficiency, lower formal educational levels and they are largely unaware of the environmental hazards that the neighborhood had inherited through decades of Chicago’s industrialization.

However, many of these Latino immigrant families are familiar with murals and are traditionally drawn to the social messages they deliver. LVEJO plans to take advantage of the cultural tradition of murals to continue to deliver its message for environmental justice and climate change. In addition, these murals will be imbedded and will be used by LVEJO in its ongoing climate change work and environmental justice campaigns.