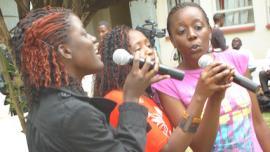 “Voices for our Planet’ is a creative activism campaign. Instead of polarizing against what we don’t want, we identify what we do want and then direct energy into promoting and creating that. This campaign managed to leverage the incredible power of the arts and music toward making a difference in our world. Utilizing artistes and the arts created interest and excitement. The campaign achieved massive coverage as a result of our media partnership with Standard Media Group. Voices for our Planet became the first national campaign on climate change in Kenya.

Here are some of the things we have achieved in 2010:

1.     We initiated two Climate Change and Environmental Degradation training workshops for Kenya’s creative industries and empowered artistes to use their talent to sensitize fans to these issues. We worked with 32 devotee artistes who were trained on climate change issues. We’ve since seen several green songs in the music scene. Some of these popular artistes include Jasigan, Stella Kagendo, Mashauri, Wafalme, Saint Crooner etc. As the project evolves, the number of devotee artistes will expand. We’ve since identified another opportunity to produce the best artistes, green songs and compilation albums. We designed a label namely ‘Green Artiste Circle’ and signed all artistes interested in dedicating their talent to the Earth. This product is developing and gaining lots of interest among singers as we challenge them to become Climate Change Ambassadors.

2.     We initiated partnerships and collaborations with government bodies, nonprofits and individual conservationists aimed at energizing our objectives. Our partnership with National Environment Management Authority availed technical training for the creative industries on climate change and further encouraged our partner NEMA to initiate, award, and announce eco-friendly and at the same time, shame eco-unfriendly companies and businesses in Kenya. The evaluation was named The Green List. This has introduced green marketing competitive edge and green business values in the market. To find out more, click here.

Henry preparing seedlings for planting at the Athi river

3.     We initiated four climate change community activities at Athi River, Rongai, Machakos and Kitengela metropolitan regions, meeting community groups and local talent expression. The community members expressed interest in our campaign and we were able to discuss climate impact with local people. Most people who were farmers resolved to plant a tree and adopt green farming methods. Together with artistes we hosted a Green Xmas for St. Paul’s Children’s Home at Rongai and planted 50 trees for the kids. Click here for more information on this work.

4.     We’ve realized increased interest in the numbers of youth volunteers in our campaigns. We did presentations at universities during the Green University orientation programs and Youth expression events lead by artistes.

5.     Our artistes were invited at the British High Commission residence for a cocktail party to do a presentation to visiting Commonwealth MPs on our work with artistes and climate change. The invite came through British Council who were fascinated by our work. To find out more, click here.

6.     During our ‘Green December’ campaign (which has now become an annual event), we called on people to ‘Give a Gift to the Earth’ and carried out a Go Green survey aimed at measuring climate change understanding among the public when making New Year resolutions. Our trained artistes led in making Green New Year Resolutions. Today, fans want to know if their favourite artistes still honour their resolutions, for example, to quit alcohol!

7.     For the first time in Kenya, environment and climate change issues have become daily editorial content as our media partner implemented the Green December campaign.

8.     We partnered with Nairobi Greenline project hosted by the Kenya Wildlife Services (KWS) to encourage our fans and public to plant a tree. We therefore became a point of contact for climate adaptation. We’ve resolved to plant a tree for each patron at our events and those joining our online platform. Through this new partnership, we shall be able to rally the public and companies to battle climate change by at least planting a tree and reducing their footprint.

9.     Through our GreenCulture Kenya online Facebook platform we have managed to introduce several accepts of climate change impact and adaptation/mitigation process as it relates to our living. The Green Culture Kenya discusses climate change and green tips. This way we have managed to make climate change more relevant and immediate to people’s life’s. Our fans are also able to track their favourite artistes and catch up with latest green songs releases. The artistes’ have continued to keep the discussion live.

10.  Another campaign introduced was the Green Valentine, a 3-week campaign led by artistes and celebrities during the traditional Valentine celebrations, calling on lovers to green their Valentine and make a pledge to Love the Earth.

11.  We held an evening Green Concert on the New Year Eve attended by over 2000 patrons. At the concert, every artiste who performed called upon the public to make a Green New Year Resolution aimed at battling climate change.

A Go Green survey carried out during the above campaigns indicated a considerable perception change and public understanding of climate change issues. The deployment of an emotional campaign strategy touching on what people care about most, revealed a raised awareness of the consequences of their actions. This lead to people voluntarily making pledges to protect and preserve the environment in the form of New Year Resolutions. “The campaign has since seen the emergence of vibrant and creative professionals working towards protecting the environment and battling climate change in Kenya,” acknowledges Henry C. Kioko, Chief Creative Officer of Beryll Foundation. “Our greatest challenge was securing sponsorship from companies because they didn’t realize the benefits of going green. We countered this through our partnership with a national governmental body that regulates and legislates on environmental issues. We encouraged the government body to introduce an environment compliance evaluation mechanism which award the companies achieving best practice and at the same time highlights those companies who are not complying. By so doing, companies started behaving ‘green’ as the awardees were honored.”

On behalf of Beryll Foundation Trustees, volunteers and the Green Artist Circle, we thank APE for leveraging the incredible power of music and the arts towards making a difference in our world. Getting the grant from APE is a great vote of confidence and timely piece of encouragement for what seemed like a somewhat overambitious project. We apply creative activism to secure a greener future and instead of polarizing against what we don’t want, we identify what we do want and then direct our energy into promoting and creating that. APE has definitely enhanced our capacity to influence businesses, communities and creative industries towards climate change awareness. Once again we are so grateful. – Henry C. Kioko , Founder & Chief Creative Officer, Beryll Foundation, October 2010