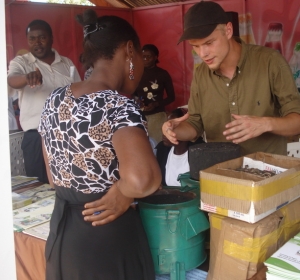 The Project located in a peri-urban Wakiso District of Uganda, East Africa, aims at promoting climate change mitigation and adaptation potential from a waste-to-energy programmes. The project will result in increased awareness about alternative energy that can replace firewood and charcoal – which are the key drivers of deforestation in the country; increased adoption/usage at household and institutional levels (schools, restaurants, gyms etc); and developing a sustainability framework for increased project impact.

Conducting media campaigns aimed at improving awareness about the benefits and importance of adopting a cleaner energy path.  This will involve producing press releases and educative documentaries

Designing, developing and distributing simple publications that increase awareness as well as providing guidance on how households can produce in a simple way, briquettes that can supplement their cooking energy needs.

Producing stoves that will operationalise a stoves-credit scheme aimed at improving access by poor households that may not have readily available funds to buy the stoves.

This project builds on earlier interventions supported by Artists Project Earth which addressed the environmental and social impacts of climate change by promoting the capacity of local communities to adapt to climate change and contributing to the sustainability of Uganda’s unique and sensitive ecosystems, with a special focus on Lake Victoria catchment. These initial interventions provided alternative and appropriate cooking energy in form of biofuel briquettes made from biodegradable waste and associated energy-saving stoves. Beyond this, the interventions encompassed better solid waste management; conservation of existing forests; promoting better health and sanitation and, creating jobs for unemployed youth and women.

The interventions have built Nature Palace Foundation’s capacity in the area of renewable energy to the current state where it is increasingly becoming a reference point in the Environment and Natural Resources Civil Society scope and beyond in Uganda as far as renewable energy, energy conservation and community-based adaptation are concerned.

The Project located in a peri-urban Wakiso District of Uganda, East Africa, aimed at promoting Mitigation and Adaptation potentials from a waste-to-energy program.  The project resulted into increased awareness about alternative energy that can replace firewood and charcoal – which are the key drivers of deforestation in the country; increased adoption/usage at household and institutional levels (schools, and restaurants); and developed a sustainability framework for increased project impact.  Main activities included developing production technology, training of youth and women groups and awareness creation through demonstrations, awareness materials and community outreach.

Click here to watch a video about the project and how the biomass briquettes are changing people’s lives.

As a result of the project, Nature Palace Foundation (NPF) has developed into a known authority in the field, and has been invited to present in a number of international and regional fora to share this experience.  One such forum was the Integrated Watershed Management regional training forum in Kigali, Rwanda where NPF presented a case on the role of alternative energy in conservation of watersheds and increasing the adaptation capacity of communities.  NPF has also presented and exhibited in the two  networking events organised by Renewable Energy Incubator, the Department of Electrical and Computer Engineering at Makerere University and the Royal Norwegian Society for Development (Norges Vel) as part of the Nordic Climate Facility project “Sustainable Renewable Energy Businesses in Uganda”, and arranged in cooperation with the NOMA-MSc within Renewable Energy at Makerere University.  As a result of these networking events we have developed linkages with institutions like Global Village Energy Partnership (GVEP International).  NPF has also participated in the Uganda’s Ministry of Water and Environment’s Annual Joint Sector Reviews to promote the role of alternative energy from recycled waste in natural resources conservation and sustainable development.

As a result of the project NPF has also developed strategic partnerships which have enabled us to develop a marketing system and further train community groups in briquette trading as an income generating opportunity.  These include Natural Enterprise Development (NED) and InterAID Uganda with whom we have worked to create job opportunities to refugee groups who were among the most vulnerable community groups but now engaged in an environmentally and sustainable briquette trade business.

Some challenges, however remain and these include :

In our future plans we intend to build on developed linkages to promote further adoption of briquette use.  We also plan to do more resource mobilisation to expand coverage of project and increased support to trained groups in form of basic machinery.  We also plan to develop a backstopping plan to small enterprises in a bid to maintain quality of briquettes, which will in turn result into increased adoption.

The relevance of briquettes as a key strategy of increasing adaptation capacity of low-income households has increasingly been appreciated by more stakeholders including government of Uganda.  We plan to build on this realisation to upscale project interventions.

We are delighted to receive funding from APE to increase awareness about alternative energy that can replace firewood and charcoal – which are the key drivers of deforestation in the country. We are grateful that APE is building our capacity in the process. The results on the ground are remarkable and our profile has been greatly uplifted. Most importantly the efforts are resulting in tangible results. Thanks a lot.