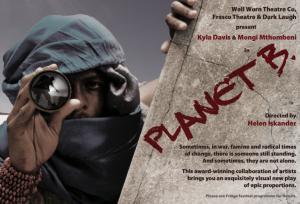 Planet B – an eco-play for our time

Well Worn is a young and vibrant Physical Theatre company with a strong environmental ethos. Started in Johannesburg in 2008, we aim to create new and stimulating theatrical work around the themes of climate change and global warming, sustainable and holistic development, social justice and the ever-growing ‘Eco-Consciousness’ taking over our planet. Well Worn would like to contribute towards creating a local and global society that values Life above the vested interests of Big Business and Bad Governance. We also strive to encourage, through theatre, the positive emotional, spiritual and physical growth of humans and their communities and our Earth. Well Worn wants to be part of the Solution….

We will be using funds generously granted by APE to begin work on ‘Planet B’, an imaginative, original and unusual theatre production about Climate Change and Climate Justice. The play is a visual diary that charts the journeys of two women who find themselves alone in a post-2050-climate-ravaged South Africa. Water is scarce, temperatures reach up to 50 °C daily, food is very difficult to grow and maintain, and diseases like malaria and cholera have worked to eliminate a huge chunk of the population. The women are alone and vulnerable as they happen upon each other in desperate circumstances. Then, we watch as moving images unfold to reveal the story of these two women, who, in their former lives were poles apart in every way: different races, different languages, different lifestyles. We will watch anxiously as they attempt to reconcile their opposing opinions, taboos and habits in order to focus on the increasingly important bigger picture: food, water, shelter, health, so that they may endure and survive their harsh surroundings and build a working life together. And perhaps, now,  they will start to understand each other better. In this ‘new way’ they will have to re-visit some of the fundamental skills and ideals that they and the human race surely must have lost sight of somewhere along the way.

This is a modern parable, using the relationship between the two women to raise and explore thoughts on the subject of climate justice as we witness the characters having to adapt rapidly and without prior example to a vastly changed environment and social structure, bridging the division between ‘rich’ and ‘poor’ as well as addressing key arguments such as: how did we get here? What is really important and essential to living? What do we value most, after all the hustle and bustle of a life of convenience has been lost? How do we live fairly and happily and healthily in a shared space with limited resources? Is it truly possible? How do we live within our means and tread lightly on this earth? How did we come to a way of life so far removed from the earth and its natural systems? And, if we had to do it all again, would we make the same mistakes again?

Well Worn hopes, with this theatre piece, to provoke juicy, in-depth, long-term dialogue around Climate Change in an African context, to facilitate debate around topics such as Africa-specific causes and impacts on our climate; the link between ecological issues and social justice issues; and readdressing values in an increasingly product-hungry and nature-unfriendly world. This will happen in the post-show discussion that will follow every show and go hand in hand with the Sustainable Living Handbook that will be available, for free, to accompany the performance.

Well Worn is absolutely delighted to have received this funding from APE. ‘WE’ is a play that has been in the pipeline for some time and, following previous unsuccessful funding attempts (we think because whoever was in charge of distribution did not quite get the picture we are trying to paint nor the importance and relevance of the subject matter…) it has been sitting quietly, gathering momentum and meaning in our imagination. We are ready to bring that imagination finally into the light and are grateful that a pioneering organisation such as APE recognises the role that theatre is to play in changing hearts, minds and behaviour around Climate Change. Especially in a country like South Africa where there are still such great socio-political, ecological and economic divides. Thank you!