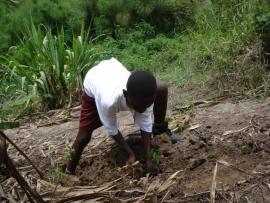 Recognising the biodiversity and ecological value of wetlands

The project located at Mabamba, Lutembe and Sango promotes local community participation in the important work of wetland conservation of these newly designated Wetlands of International Importance sites. This is achieved through Clean Up, Fix Up, and Media Advocacy campaigns which work with local communities and create a wealth of community benefits. The campaigns involve the removal of existing waste and sources of pollution, the rehabilitation and bioremediation of eco-systems through tree planting and renovation, and the active engagement of local community members and their leaders at various levels from village to national parliament.

The importance of this work is conveyed via local theatre, drama groups, leaflets and online blogs and explains the contribution made by local communities, advocating improved benefit sharing to the wider community. The campaigns not only improve the wellbeing of these ecosystems, but raise awareness about these ecosystem’s functions in abating climate change.

The project activities culminated into a campaign to rehabilitate the Bukoola River.  Due to its natural ecological value, the Bukoola River in Kakuuto County in Rakai District has for decades served a significant role to the local people as a source of water, fish and pasture for animals in the dry season. Notably, this river still stands as a key feature to aid the local population adapt better to effects of climate change in this semi-arid region. But in the last three years, its water levels have drastically dwindled due to indiscriminate destruction of its banks through tree cutting, uncontrolled grazing and river-bank gardening, causing some of its parts to dry up, thus causing a great danger to the local population, Sango Bay-Musambwa-Island Ramsar site and Lake Victoria in general.

River Bukoola feeds Sango Bay Wetland system, which is an important bird sanctuary with exceptional biodiversity. The system is known to have the largest breeding colony for the grey-headed gulls in Africa and 75% of the total global population of the blue swallow, Egyptian goose, little egret, long-tailed cormorant and greater cormorant. Unique reptiles like snakes and lizards are also found in the wetland and Island system which are covered with forest mosaic containing 30 endemic floras, restricted sub-species of primates, elephants and sitatungas.

The over-degradation of River Bukoola and its water catchment areas has led to a significant change in the course of the river. Today, most of the district teeters on the edge of disaster and no doubt if no serious action is taken, the addition of climate change could push it over to the edge.

The campaign started with ‘Community Mobilisation, Sensitisation and Education’ which enabled bringing on board a broader layer of the community – including those that are involved in degrading activities of the river. Through this process community members who have gardens on the banks of the river were able to surrender these pieces of land to be rehabilitated and to pledge to take care of the trees that were planted.

This phase was followed with an official launch of the campaign which gathered the various stakeholders to share views. Testimonies from the community were also heard and these sent lasting messages calling for action from our leaders. The theme of the launch was “Our Climate needs your attention”.  Interventions to help restore this eco-system will require a concerted effort of more stakeholders for at least three years while building the capacity of local partners to conduct continuous monitoring and evaluation of the campaign and to provide support supervision of participants, especially those taking care of areas under rehabilitation.

“We thank APE for this timely support which is a major step in a long-term effort to ensure the sustainable conservation of these crucial resources for the benefit of both local and global communities. We are really grateful.” Nature Palace