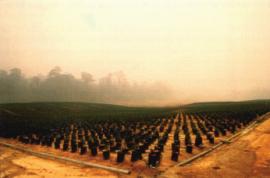 Highlighting the links between climate change and industrial agriculture

Cine Rebelde’s project, “When the land feeds the machines” is a feature length documentary project about the role of industrial agriculture in the current climate and energy crisis. This film aims to document the emerging agrofuels market which is intensifying global warming and deepening social injustice. It will provide a voice to activists and communities in resistance against a model of industrial agriculture based on fossil fuels and large monocultures.

The film will start in Brussels at the ‘world biofuels market’ event in March 2008 and then take a journey back to the origins of agrofuels.  It will go to Indonesia where major palm plantations are replacing one of the world’s most important carbon sinks, (rainforest and peat swamps) at breathtaking speed. Then to Colombia to hear the testimonies of displaced communities from their ancestral land for palm oil plantations and then on to Brazil to show how 2,000 women in an act of civil disobedience destroyed 1 million eucalyptus seedlings against monocultures. From there, to Mexico where dramatically rising international corn prices, spurred by demand for the corn-based fuel ethanol have led to expensive tortillas sparking rebellions all over the country.  The film will conclude in Europe, taking us back to the event in Brussels. The film will be distributed widely, both through alternative networks and mainstream media (TV stations).

“We believe it is imperative to raise more awareness about the relation between climate change, the energy crisis and the fossil fuel based food system. And in this context to expose how agrofuels are not a solution to climate change, but on the contrary how they are threatening to accelerate global warming. The APE grant will help us producing this film which we hope will generate debate about the need to switch to a low emissions model of transport and food production.” Cine Rebeld