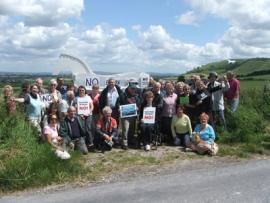 Formed from a campaign that emerged from the anti-roads protests of the 1990s, national NGOs, parish councils and thousands of local objectors, the White Horse Alliance is committed to stopping a bypass wrecking the magnificent landscape of the Westbury White Horse. Stopping this road will prevent a new highway corridor increasing traffic and carbon emissions in Wiltshire, Dorset and right across the south-west of England, which would otherwise place unsustainable burdens on wildlife, farmland and water resources and divert investment from rail and vital public transport for the cities.

The project aims to make these proposals a byword for Labour’s bloated roads programme. With national awareness and support they hope to challenge the planned road in the High Court. They will use the EU Habitats Directive: bats and dormice in their defence to reach the legal parts that climate law can’t yet touch.

“We are extremely grateful to Artists Project Earth for their generous support. The money will enable us to raise awareness and funding for the next stage of our campaign against this pointless and destructive road. If the government decides to ignore all the evidence and give it the go-ahead, we must be ready to challenge them in the High Court and the European Court of Justice. We are determined to make the Westbury bypass a test case for Labour’s ‘green’ credentials, exposing the gap between its professed commitments to sustainable development and to curbing carbon emissions and its willingness to fund a bloated roads programme designed to allow traffic to double by 2050.” White Horse Alliance