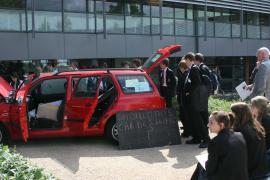 Having established the Winchester Sustainable Schools and Colleges Forum (WSSCF) in October 2008, WinACC has since organised three educational events for schools and young people in the Winchester area, with the aim of inspiring, educating, motivating and enthusing hundreds of young people to be active on climate change issues.

The first event was a Low Carbon Conference held at Peter Symonds Sixth Form College  in July 2009 with 50 secondary school pupils from Kings School, The Westgate School and Swanmore College of Technology and around 170 sixth form students from Peter Symonds Sixth Form College participating.  The activities included calculating their carbon footprints online, a classroom activity called The Real Price of Food, an exhibition and a screening of the latest climate change film, The Age of Stupid.  At the end of this whole day of activities participants were encouraged to fill out a pledge card saying what three things they intend to do to reduce their carbon fopotprints.  These pledge cards were collected in and were then posted to them as a reminder at the end of September.

The second event, the Low Carbon Conference was delivered at Sparsholt College in October 2009 with a total of 115 participants.  Activities were themed towards sustainable food an energy production and included a keynote speech by Clare Schekter of Laverstoke Park organic farm, called Where’s The Impact?, which looked at the product life cycle analysis of a bacon sandwich, calculating their carbon footprints online and building a model Hydrogen Fuel Cell Car.  As at Peter Symonds participants were also asked to complete a pledge card at the end of the day. A 10 minute animation about the key environmental tipping points that could trigger runaway climate change, called Wake up, Freak Out, then get a Grip was also shown to participants at both of the above events.

The third event was an environmental film weekend, which took place at the end of September.  This started with a children’s animation workshop where 18 children produced a short animated film, called Top Tips to Save the Planet.  Each child received a copy of the film on and it has also been posted on You Tube, the WinACC website and Facebook.  The next event, The Hard Rain Picture Show, by Mark Edwards, was organised in partnership with the University of Winchester and was held in October. Over 155 people attended this free event and took part in a facilitated discussion afterwards. 2nd October was National Carbon Footprint Day, so we ran 3 free workshops for people to calculate their carbon footprints online at the Discovery Centre.

Overall the evaluation forms completed by those who attehded the conferences showed positive responses – 89 percent of the scores for activities at the Peter Symonds College day were rated ‘good’ or ‘very good’; the equivalent figure at the Sparsholt College day was 78 per cent.

“Winchester Action on Climate Change (WinACC) is very pleased to be awarded this funding which will make an important contribution to meeting the costs of the Low Carbon Days that we are planning in 2009. It will enable us to be more ambitious than we might have been, and allow more time for thorough preparation. We are intending that the Low Carbon Days will be innovative and imaginative, and fully engage young people in exploring how human caused climate change is likely to impact on their lives and the lives of others.” Winchester Action on Climate Change