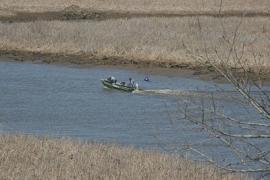 Reconsidering our place in the natural world

Inspired by sojourns to Mount Kilimanjaro, Costa Rica, and the Hudson River, Wounded Splendour is a multi-media performance work incorporating poetry, monologues, live music, video, and lighting.  The aim of the project is to set up a dynamic theatrical tension between the “splendour” of the natural world and the “wounds” that humanity has inflicted upon it. The goal is to activate audiences to enter the natural world with renewed curiosity and appreciation, and to stimulate them to participate in grassroots efforts to correct the imbalances of consumerism and environmental destruction.

In a residency and workshop at the Clarice Smith Performing Arts Center at the University of Maryland in the Spring of 2009 the script, music, and imagery of Wounded Splendour were created. For this workshop version fourteen disparate segments were produced, ranging from a monologue on coal mining, another on river pollution, the disturbing loss of fireflies in the environment, rants about oil spills, the plight of the albatross, as well as poems about climbing Kilimanjaro, and the wonders of an undersea adventure. Each piece had distinct video and music that were highly considered and crafted. A series of “talk backs” with audience members was conducted and it was found that the idea of presenting climate change issues (and other environmental concerns) was greatly appreciated.

A series of five “Touch the Earth” workshops was held with Middle School students in which they studied the work of sculptor and environmental artists, Andy Goldsworthy.  The children were taken to several different natural environments where they created original “earth-art” works, which were photographed. These pieces became catalysts for creative writing, discussion, and performance.

There will be further creative workshops this fall and winter, and then an intensive rehearsal process in the Spring for the May 7th World Premiere at the University of Maryland.  Wounded Splendour will be represented by Bernstien Artists Management for national and international touring starting in Spring 2011.

“It is my belief that the environment – water, trees, air and sun – form some the most basic and common linkages among all people. Wounded Splendor and the various creative works of David Gonzalez tap into that powerful and universal chord among us, using poetry, music and multi-media to arrest our attention and help us give voice and substance to the primal power of the environment in lives and spirits. We are grateful that APE will help us bring this powerful material to a wider audience” David Gonzalez/RainArt Productions “Thank you for your generous support for the ongoing development of our multi-media performance work, Wounded Splendor. Your funds will help us expand the video design elements for next season’s world premiere at the University of Maryland’s Clarice Smith Performing Arts Center on May 7th, 2010. We hope to sensitize people across the country to the environmental threats that grow more each day, and to re-invigorate the activists who will be drawn to see the piece. I commend APE for your work and am delighted to partner with an organization with such a mutual mission – art speaks across all borders; geographical, political, personal.” – Fred Tutman/Patuxent Riverkeeper