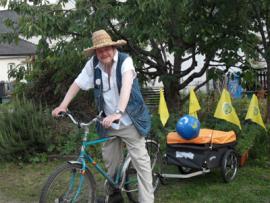 The Zero Carbon Caravan (ZCC) is a collective of individuals who have taken it upon themselves to launch a low-cost, high-profile climate change communications initiative centred round the critical UN climate talks in Copenhagen in 2009

ZCC plans to generate a mass movement of individuals and organisations to carry the message of action on climate change to the talks. First, they will lead by example, as a group of communicators and campaigners making their way to Copenhagen without using fossil fuel transportation. Along the route they will connect with local groups to establish an itinerary of ‘zero carbon conferences’ to build momentum for zero carbon awareness, demonstrating solutions such as renewable energy through zero carbon concerts, with electricity generated mainly by bicycle-power.

Second, the ZCC will act as a coordinating hub for other ‘caravanning’ groups, who will all convene in Copenhagen. There they will organise a final zero carbon concert, with a high-profile media presence, including radio/internet broadcasts, encouraging worldwide participation to demand of the UNFCCC their mission: ‘A zero carbon world, as fast as we can’.